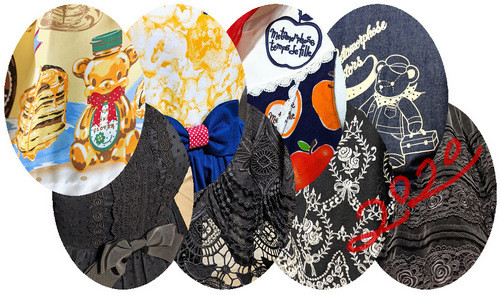 My goals last year were to acquire more gothic pieces and to be patient in saving up, both of which I achieved! (Well the second was in reverse... it was more "paying off" than "saving up for" but I'm counting it!) My wardrobe stayed roughly the same size but now it's mostly comprised of pieces that I love.

Instead of meets, I now mostly wear lolita to run errands, or to spend time with my fiance and non-lolita friends. Sometimes I'll take coord shots on such outings, so if you want to see my dresses worn, you can catch that on my
>>>>> INSTAGRAM <<<<< 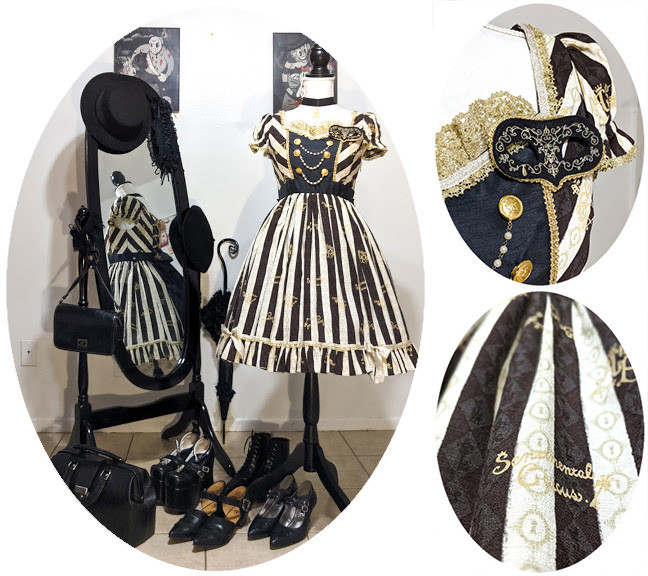 1. Alice and the Pirates - Sleepless Masquerade in the Twilight OP
My favorite of the Sentimental Circus collabs! I've been flip-flopping over whether to keep it or sell it since it's too OTT (compared to the rest of my wardrobe) to really wear much. Maybe I can just give it one last hurrah before passing it on? But argh I love it too much! 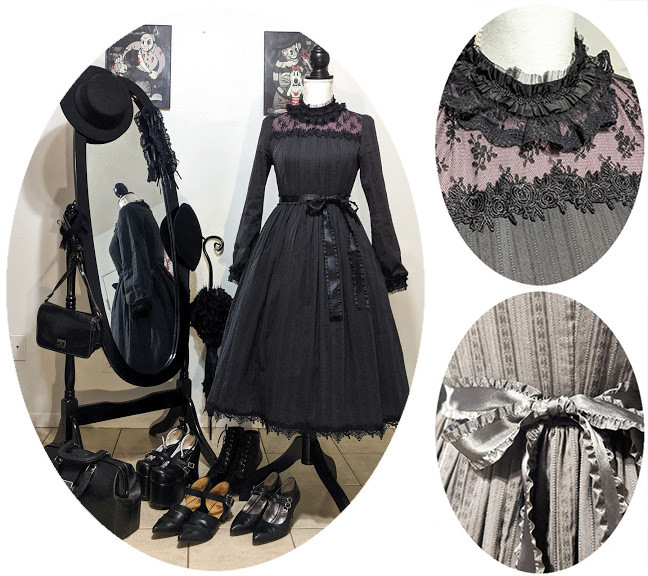 2. Akane and Alois - Devil Doll OP
There was a time where I bought a bunch of pieces because they were cheap and I wanted a bigger wardrobe fast. Since I didn't love them most were sold, but this one turned out to be a diamond in the rough! I bust it out quite often on the rare cold days we get in Texas. 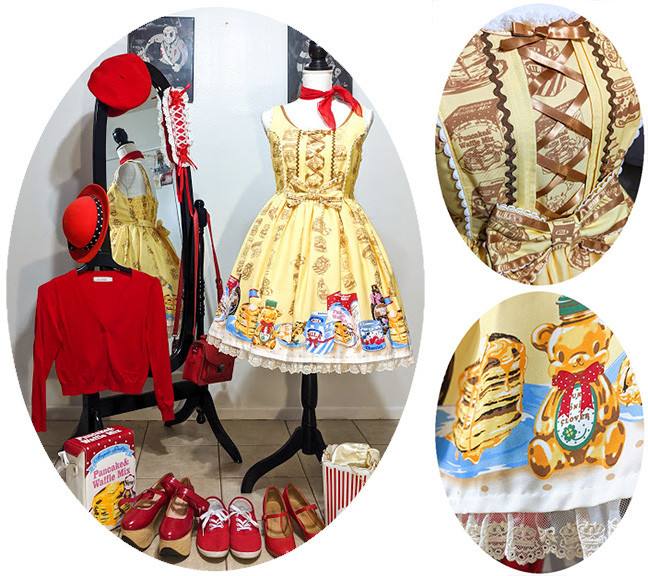 3. Angelic Pretty - Honey Cake JSK
AP is far from my favorite brand but this print is gold and my absolute favorite lolita print ever, so when the MTO was announced I had to jump on it. However, if we're being honest, this feels like a giant "FINE, here you go, now shut the fuck up," from AP. The quality is... disappointing, but I am very happy to own this print. I'm conflicted to say the least. 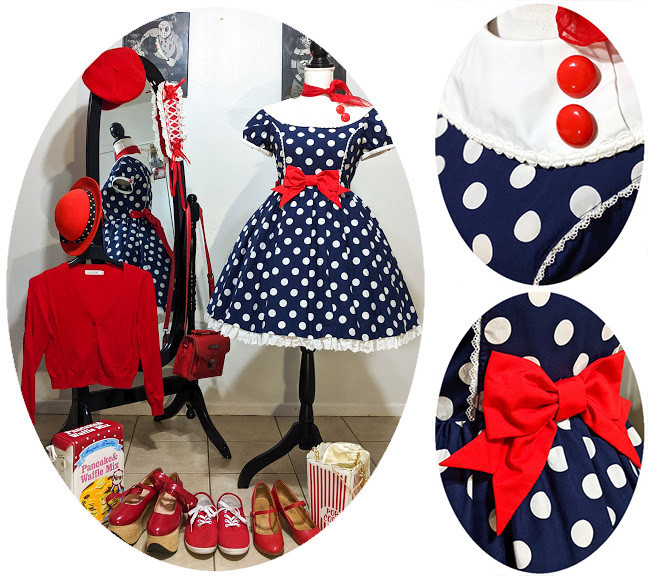 4. Angelic Pretty - Retro Dot OP
This is just so damn CUTE. Big polka dots and big buttons to match. They serve absolutely no function which almost makes me like them more. It poofs out beautifully with a petticoat, no doubt because it's made of cotton, which I hear is becoming increasingly uncommon for AP nowadays. Not gonna lie, this is what I expected of Honey Cake. 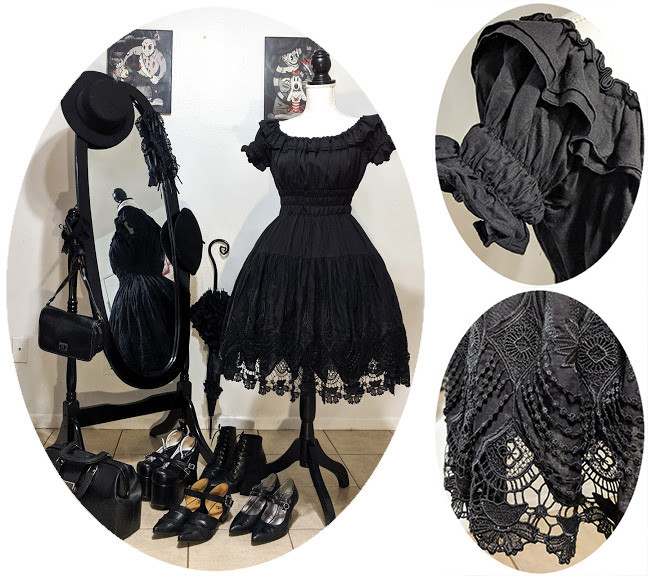 5. Black Peace Now - Gathered Embroidered OP
My newest addition! I saw a different colorway of this in someone's old wardrobe post and fell in love... Then I found out BPN was defunct and I gave up any hope of ever finding it. By chance I happened to spot it in the related items for a different dress I was looking at and snatched it up. My only complaint is the lining is particularly swishy but I love it so much I don't even mind. 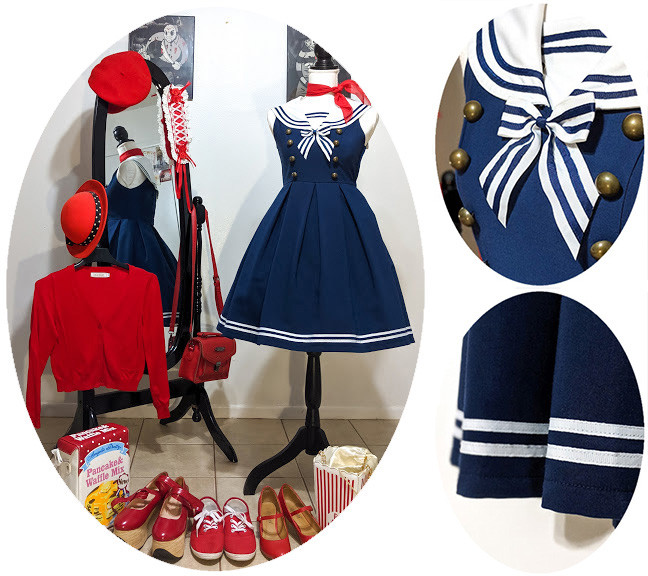 6. Bodyline - Costume839 JSK
My first actual lolita dress. It's good for wearing in casual "normie" outfits too, if a bit weeby. At the time I really wanted a sailor dress and I found myself choosing between this and that one Hell Bunny dress. As you can see, in the end I chose the lolita life. 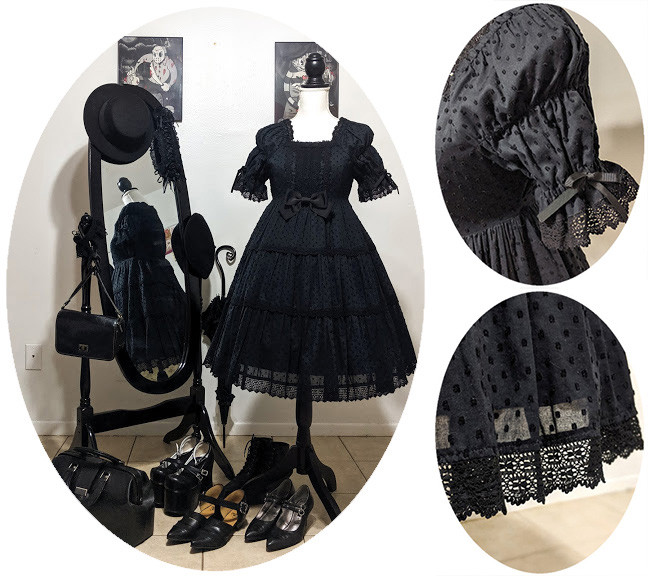 7. Baby the Stars Shine Bright - Dessert (2009) OP
I used to think I hated BTSSB but it turns out I'm just not a huge fan of their prints. Their solids are beautiful though, and I would love to get more! Because of the thin fabric, it's really good for hotter days and feels so pretty to wear even though it's so simple. I met up with a lolita in a dark parking lot to buy this which in retrospect probably looked really shady. lol 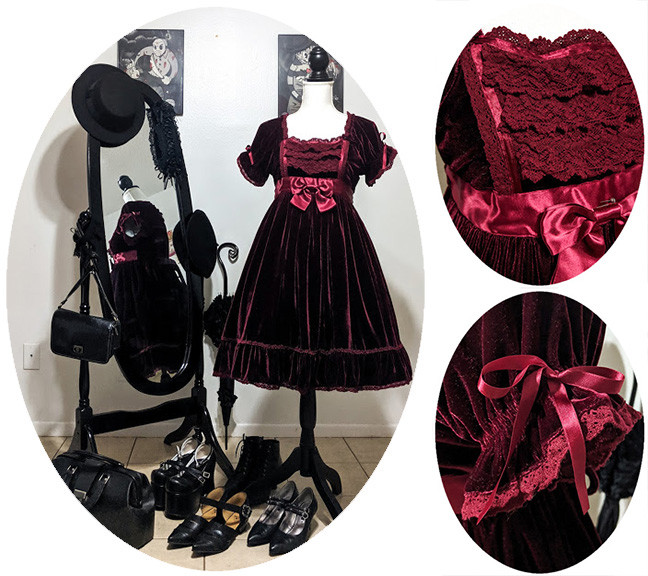 8. Baby the Stars Shine Bright - Marcia Velour OP
I saw this on LM but missed it while debating whether or not I really wanted it. Of course, missing it made up my mind but luckily another one showed up shortly after. The velour feels sooo nice and makes me want to buy more of Baby's velour pieces. 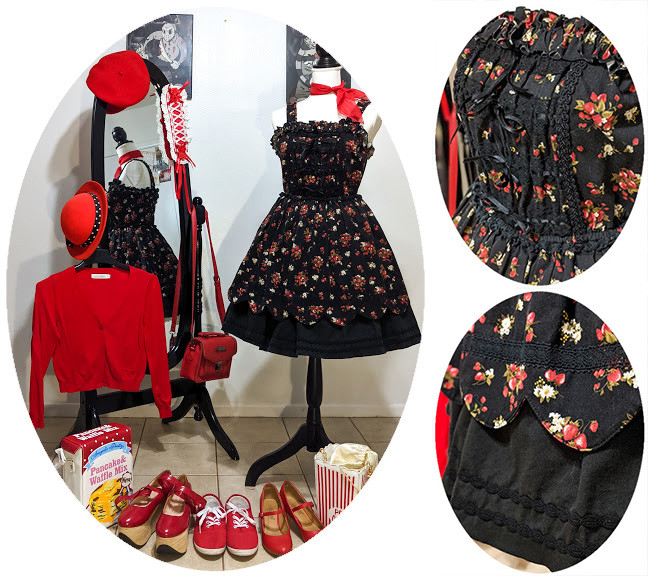 9. Chocochip Cookie - Strawberry JSK
A friend of mine gifted me this dress and a matching bonnet when she left the fashion. It's really easy to throw on and is quite sturdy so I can toss it in the washer without worries. I've seen a Meta jsk and an AP op with this same fabric that I've been tempted to buy just for kicks. 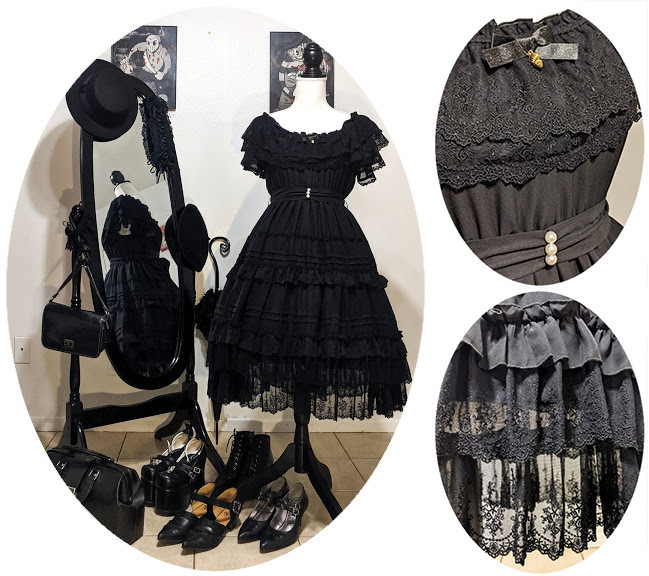 10. Dear Celine - Ariel The Little Mermaid OP
I'M AN IDIOT. Two years ago I thought that it was missing the ruching up the sides that was shown in stock images. It turns out I just completely missed the ribbon you have to pull to achieve that. The belt and brooch are cute but I never ever wear them with this dress. 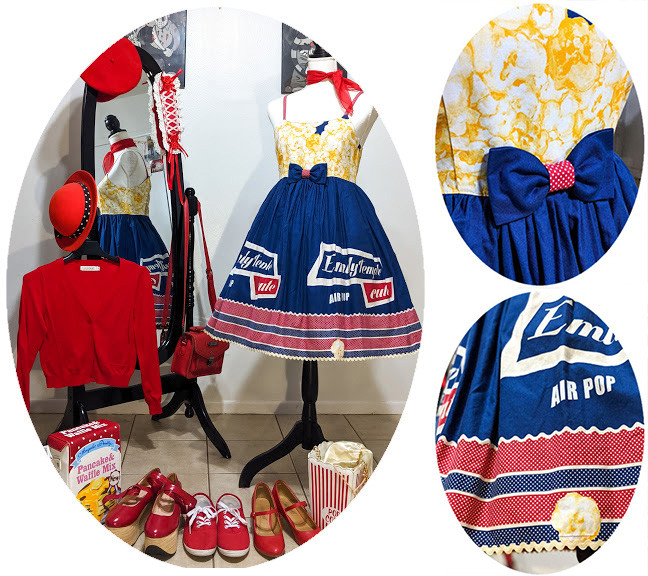 11. Emily Temple Cute - Air Pop JSK
So when I bought this I thought the fit was a bit odd but ignored it because I loved everything else about it so much. However, I found out that the elastic in the back wasn't sewn on properly. It wasn't dead elastic it just... wasn't sewn, so there was a string of elastic just hanging out in a channel not fulfilling its purpose. I got it on clearance anyway but wtf ETC? Luckily it was an easy fix! 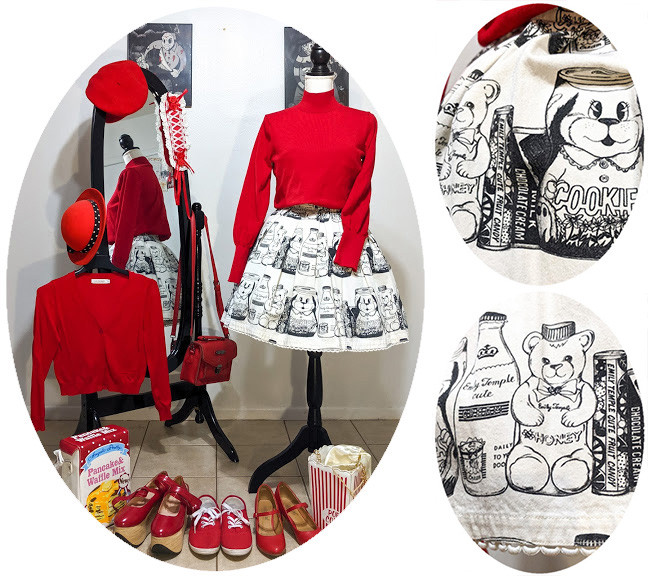 12. Emily Temple Cute - Bear Jars SK
This is kind of cheating because I never wear it with red but it fits in with the more retro side of my wardrobe so... yeah. I love it because it reminds me of vintage cartoons and Honey Cake, a print I longed for, but of course this was waaay cheaper to get a hold of. 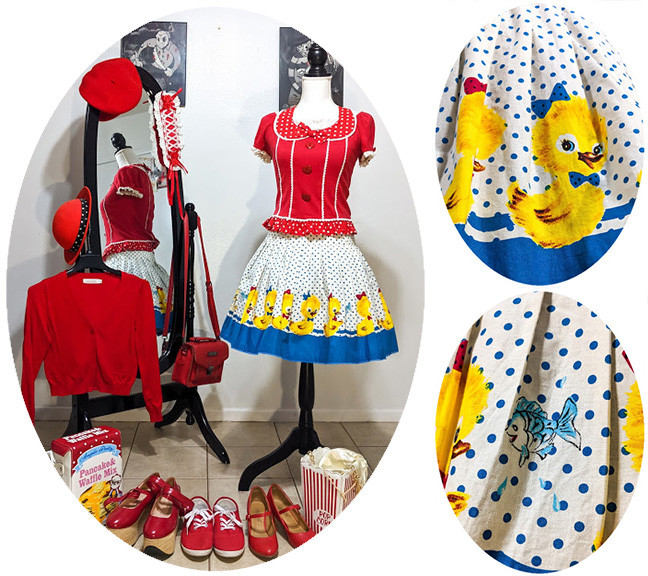 13. Emily Temple Cute - Ducks SK
To this day I have not worn this skirt. The way it's fitted on top and then flares out has me stumped but I refuse to sell it because I think it's super cute and because I'm going to find a way to make it work damn it!! 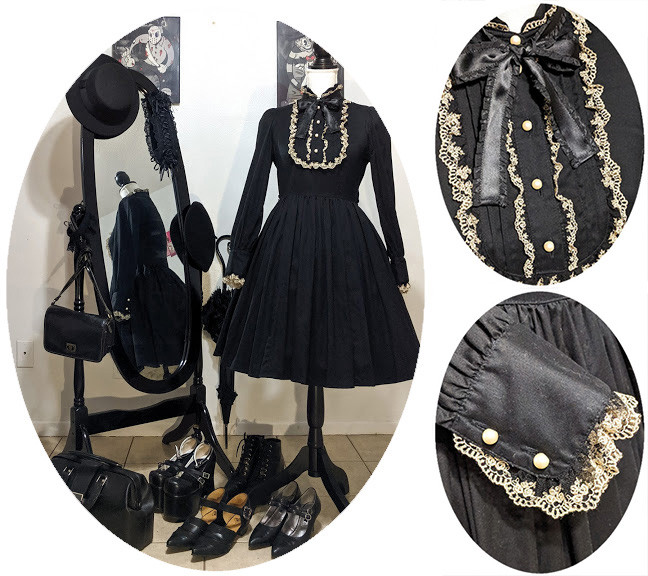 14. Innocent World - Belinda OP
Simple, sturdy, and classic. It would get worn a lot more often if it wasn't eternally 10 degrees hotter than hell here. 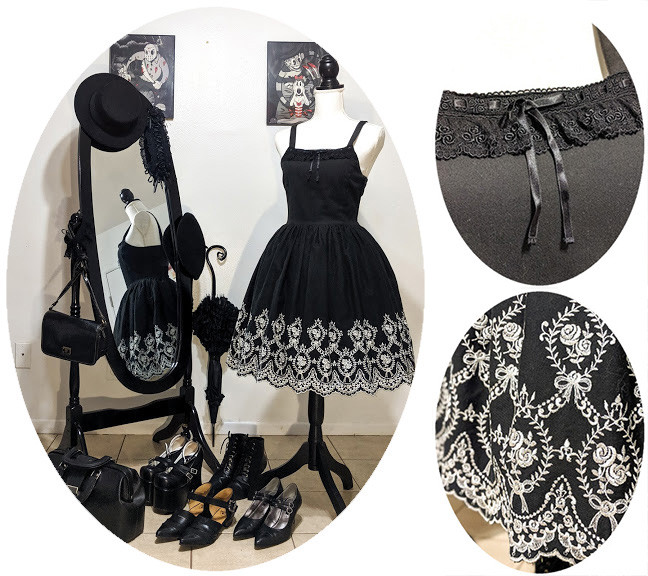 15. Innocent World - Roses and Ribbon Embroidery JSK
It has lovely embroidered roses and it's black so of course I love it! I wish it had more petti room but sometimes you need a dress you can wear to an antique store without fear of knocking anything over, you know? 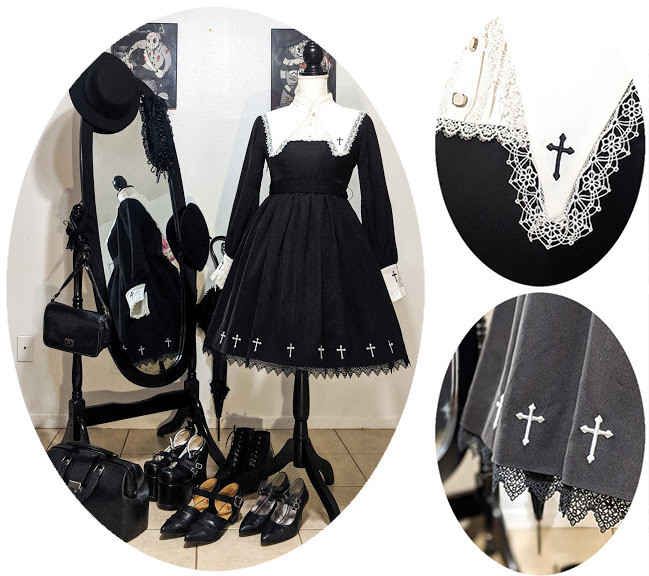 16. Ista Mori - Nameless Poem OP
Still the absolute best thing I've gotten from Taobao. The fit is so exact it makes raising my arms a little hard, but the discomfort is worth it when it makes me this happy to wear. I do really wish they had put in a back zipper instead of that useless little side zipper though... 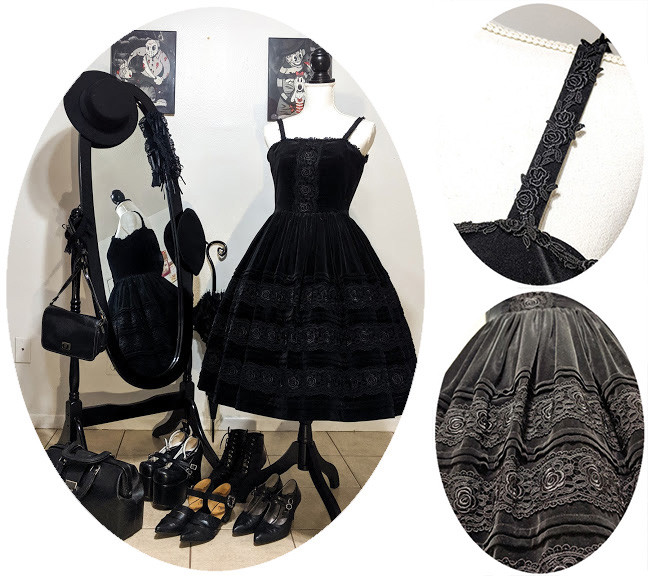 17. Juliette et Justine - L'etoile du Soir JSK
The crown jewel of the more gothic side of my wardrobe. This thing is so fucking lush and beautiful and I can't believe I'm lucky enough to own it. It's the most I've spent on a dress but it was worth every penny. Although it's simple enough to wear out to dinner or something, I'm trying to save the first wear for a special occasion. 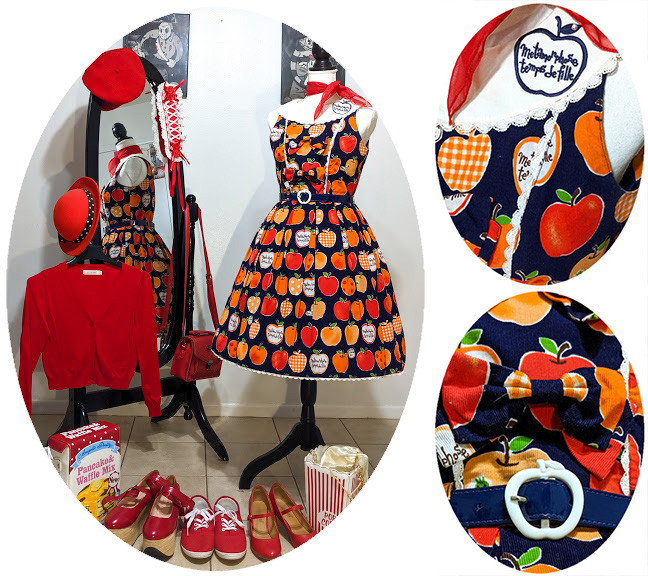 18. Metamorphose Temps de Fille - Apple JSK
The holy grail of the more retro half of my wardrobe! I fell in love with it when I saw a picture of a girl wearing it online. Coincidentally, we ended up becoming friends and she's actually the one who sold it to me! I love everything about it and I'll treasure it forever. <3 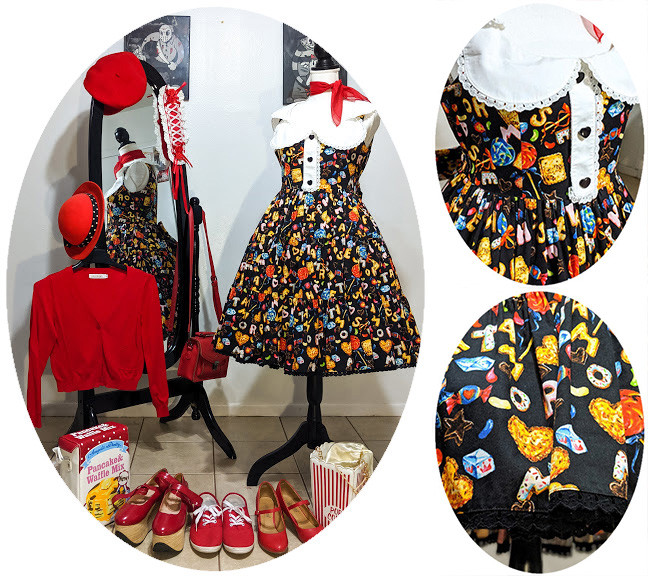 19. Metamorphose Temps de Fille - Biscuit JSK
I've been really close to selling this multiple times because it's almost TOO tacky but that same tackiness keeps drawing me back in. I haven't worn it in a while, which tells me what choice I should make, but... 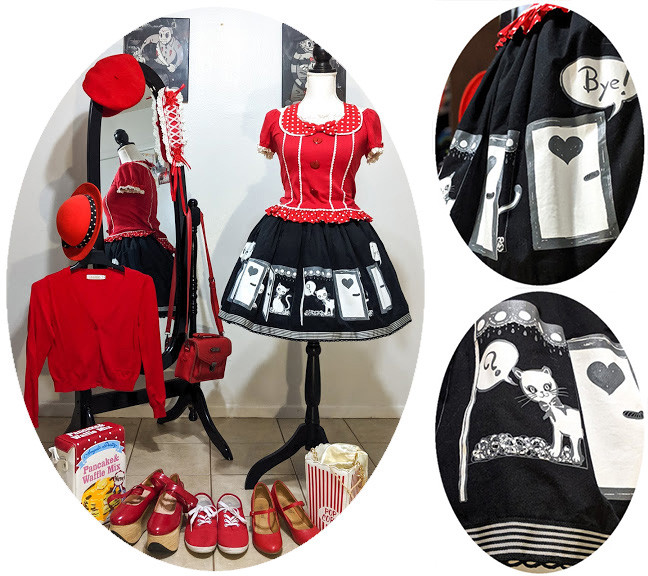 20. Metamorphose Temps de Fille - Cat Door SK
Why are lolita skirts so goddamn tiny? I've gained some weight through the years so I can't wear this unless I leave the side closure open 😭 I still really like the print though, so I've been hunting for the JSK version. (Please hit me up if you see it anywhere!) 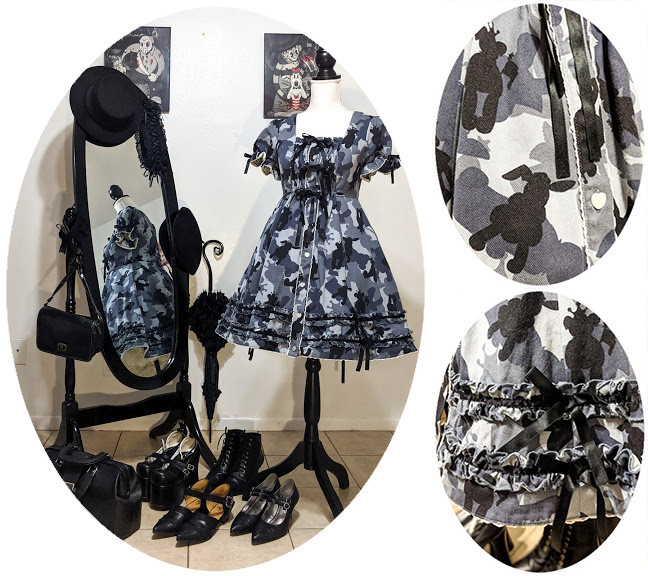 21. Metamorphose Temps de Fille - Punkuma Camouflage OP
I was once one of the poor misguided souls who thought this thing was ugly as sin. Then I realized that the camo pattern was made up of Rabbitchan and Punkuma silhouettes and suddenly I had to rethink everything I ever knew. The first time I wore it was to see She Past Away and another one of my favorite bands happened to be waiting right behind me in the line to get in. I totally lost my cool, but it's a fond memory! 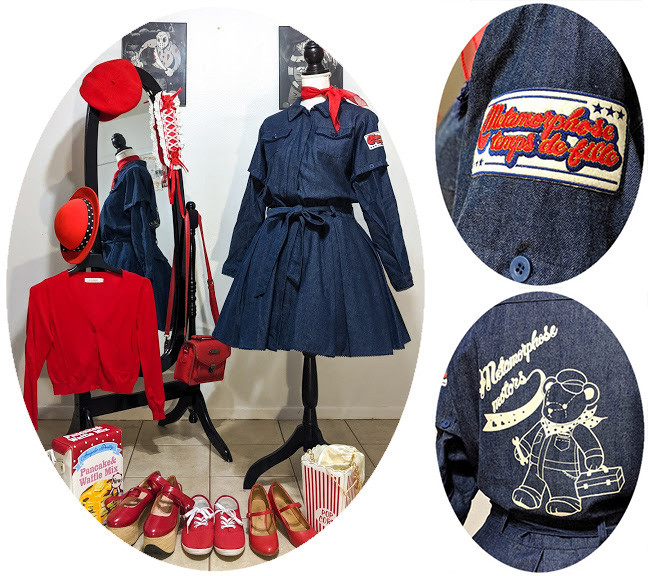 22. Metamorphose Temps de Fille - Teddy Motors Coat OP
It's a DENIM JUMPSUIT dress with a TEDDY BEAR MECHANIC printed on the back. PER-FEC-TION. I checked auction sites for this religiously and missed it one day, but after expressing my woes a heroic anon sent me a link to a different listing she found. I'm eternally grateful! 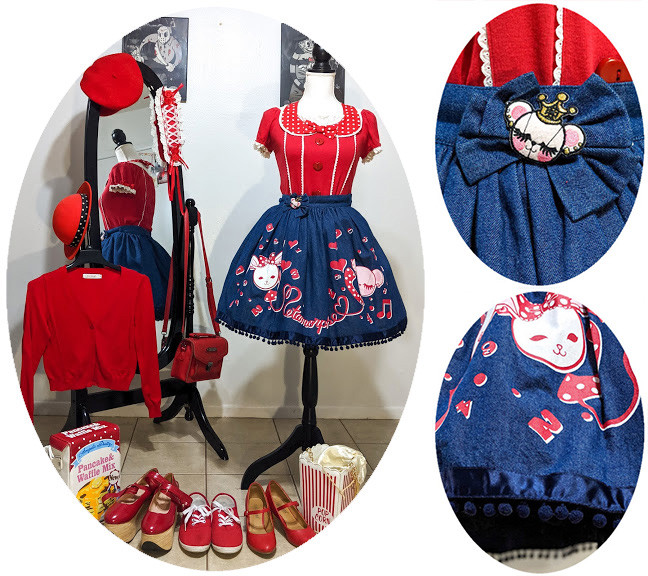 23. Metamorphose Temps de Fille - Telephone SK
Have you noticed how much I love Meta yet? Especially this era! This is another denim number and features my favorite lolita mascots on the phone, probably talking about how much better they are than Lyrical Bunny and Usakumya. Because they are. don't @ me 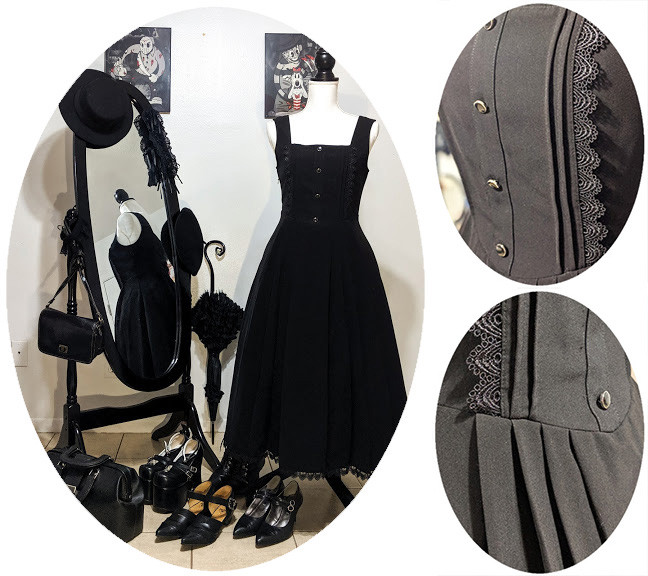 24. Ouroboros - Joan JSK
I wanted a long black dress to wear casually and the fact that this one fits a petticoat made it preferable to a random black department store dress. It's nice but Ouroboros's production time is not. 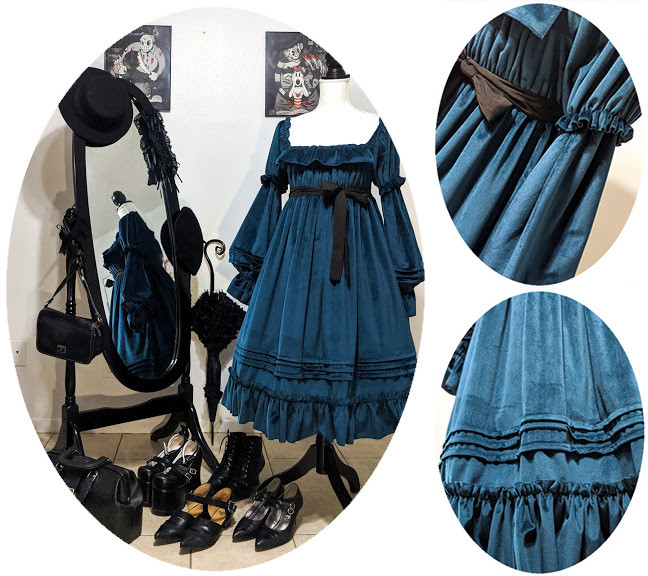 25. Walpurgis Night - Juliet OP
I love this teal color and would love to get more of it in my closet. It was advertised as velvet but I honestly think it's minky fabric? It sure feels like it. That aside, I really like it! The removable sleeves and simple design give it some versatility.

My lolita wardrobe and my normie wardrobe share a lot of accessories, so to keep myself from going insane I'm only showing the items that I bought from lolita/lolita-adjacent brands or that I bought primarily to use in lolita coordinates. 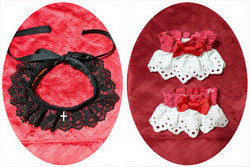 I've been very lucky as far as hunting dream dresses goes so I'll probably slow down in buying main pieces and focus more on things like blouses and accessories. But of course dresses are much more fun to buy so we'll see how that works out...
In addition to that goal, I'd really like to get some Moitie into my wardrobe (which I thought was completely unattainable due to the sizing but learned recently that some more forgiving pieces are out there) and go to a big lolita event such as a brand tea party because I've never been to one.

Thanks for enduring my rambling! See you again in a year... or two... or three...
Tags: community: wardrobe post, theme: january
Subscribe