Who will be attending PMX in Los Angeles this November 8th to see Juliette et Justine and attend their tea party? Give a shout out and say hi! I was also  wondering if anyone had planned (or heard of) a lolita meet-up for the con and wasn't sure the best place to ask. (I don't believe PMX has a forum on their website, which is normally the first place I'd check) If you've heard of something already, please let me know, I hope to meet lots of new lolitas at the event!

Hello Everyone!
On Sunday, October 13th, we held the first Disneyland Lolita Day!! We (both the hosts, Hayley and Sami) were super excited to see this day happen, and were so happy many lolitas came. We had a lot of fun throughout the day, and we think all our attendees did too. We took photos of everyone's outfits, handed out Limited Edition Disneyland Lolita Day 2013 buttons, had two group photos, and did a Mad Lolita Tea Party on the teacups ride <3
Here are some pictures from the day, and please be sure to check out our Facebook page, as we plan to hold DLD again next year!! 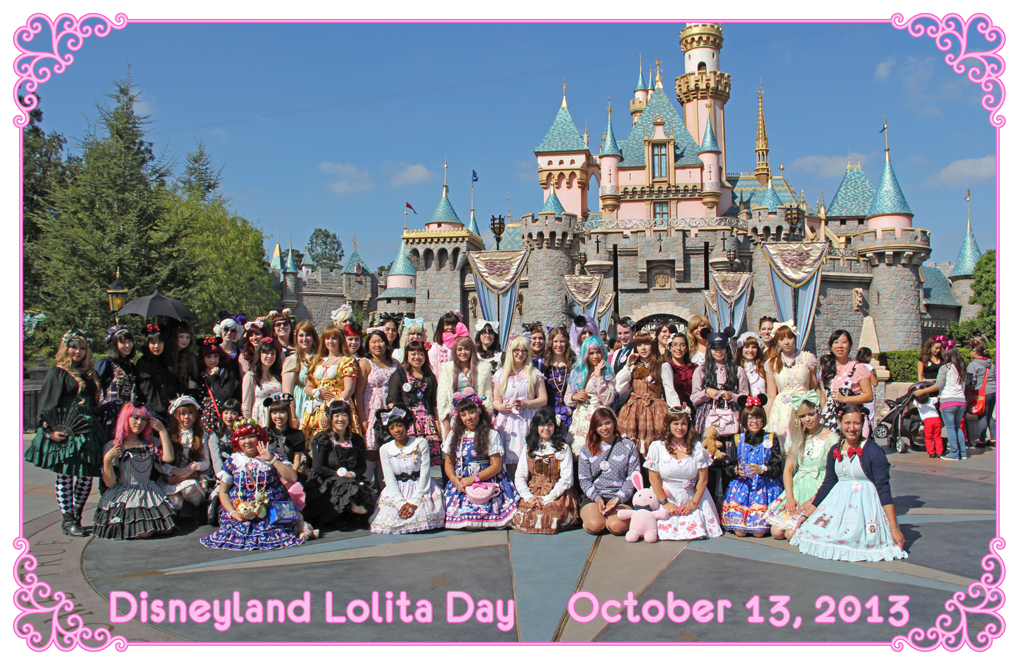 Hello. I have an AATP witch hat from the Merry Making in Ghost Town series, and while it was packaged in a nice big box with lots of bubble plastic and wrapped nicely in tissue paper and all that, the shipping company basically destroyed the box, and the hat was squished in transit. The once very large and sturdy square box arrived flattened.

There are multiple creases in both the cone of the hat, and especially deep ones around the brim to the point that it no longer holds its shape — it just flops down like a hood and looks awful. It's just not wearable in its current state.

I don't care about filing a claim because it isn't about the cost or the order itself. What I want is the darn hat, and they're sold out so there's no hope of a replacement. Is there any way I can repair it, or get the creases out?

If I run my hand along the fabric I can feel that the stiff pieces inside are folded, and so far, no amount of tinkering with it or trying to adjust it with my hands has been able to return it to its original shape. It looks so sad, and I'm very sad about it.

Bonus question: I also have a bonnet with a crease in it that's been sitting in my drawer. Is there a way to get creases out of those, too? It stands up well, but theres a visible line down the side of it where it had been accidentally folded, and it's slightly misshapen because of it.

Welcome to the EGL Free for All! Now also on Mondays! Yay!