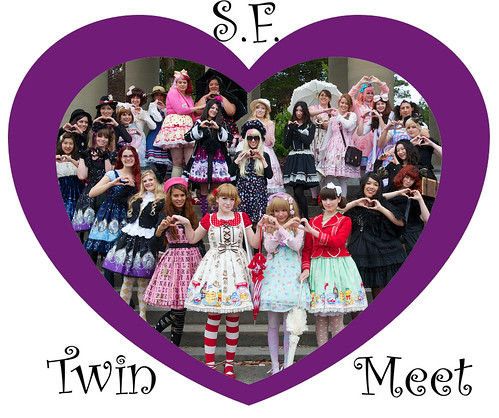 I was checking out the English AP website this morning, and I was surprised to see that they added a blurb to the homepage like Innocent World had:

Dear Angelic Pretty Valued Customers,
Angelic Pretty is aware of that there is a lot of concerns regarding counterfeits / replicas.
We officially do not condone these types of illegal behaviors.
We will actively pursue those who continue these illegal activities.
We appreciate all of the customers who support Angelic Pretty.

Thank you for your understanding,
Angelic Pretty

What I found more surprising however, is that it looks like it's even on the main Japanese site too (I don't know how long it's been there; I usually use the Japanese site to look at new items, but I can't read Japanese and usually only bother running Google translate on actual item pages...)

and it looks like it's on their US homepage too.

There's been a lot of talk about how they are probably one of the brands most targeted for replicas, but up until now, they haven't really been that public about their stance on the issue, and so I thought it was rather interesting that they put up something.

It's been mentioned before that such statements are not often issued by Japanese companies because the culture there is not as direct about things. So, it's interesting to see how the brands, like AP and IW have sort of adapted to the international stage as they expand their markets in this way (as well as in other ways, like the addition of size L blouses and English sites from both brands, for example). It makes me sort of wonder what other changes we might see in operation and products as they increasingly expand to become global companies.
Hi, everyone!

Back in June, we were contacted by a representative from Angelic Pretty. The representative expressed their concern over the fact that illegal replica items were hurting their business, and asked for our help in addressing the issue. In mid-July, they formally requested that we ban replica items from

egl_comm_sales. You can read that original announcement here. Since then, we've been working with them to craft an official policy regarding replicas on

egl and its sister communities.

In addition to this ban, Angelic Pretty, Mary Magdalene, and Innocent World have all directly spoken out against replicas. You can read more about it by clicking on each brand's name to read their respective announcements.

Hopefully, this announcement will help clear up any lingering questions about the recent replica ban. It will also be linked in the rules if you have any questions going forward.

( Follow the fake cut for the full version of our rules on replicas! )

For those of you who are into h.NAOTO's fashion, and are considering attending AWA on September 28-20th at the Renaissance Waverly Hotel and Cobb Galleria Center in Atlanta, Georgia, here is an opportunity for you to either attend a brand fashion show, or even participate as a model! No experience needed!

The time is near for the annual Lolitaloppis in Sweden! This year we are hosting it in Göteborg on August 18th, 2012. The direct location is at Draken (folketshus) near Järntorget. Entrance is FREE!

We still have room for sellers if you would like to book a table! Whether to have your own small business or have a few things you want to get rid of second hand, we have room for you! Come book a table to sell your loliable goods, or stop by to add something great to your collection!

Since we have booked such a wonderful and spacious venue, we have decided to book a fashion show!

If you are interested in signing up to be a model (you can provide your own clothes or we may provide them for you) please head to our website www.lolitaloppis.com for more info. You can also like us on Facebook.

If you have any other questions, please feel free to contact us!

We hope to see you there!

Has anyone ordered a wig from Shojomonsta? I want to order from them but haven't seen any reviews around.

Hey everyone, just a quick question! I recently bought a btssb Angel's Window/Angel's relief jsk, and since I've never owned any other jsks/OPs/skirts featuring appliques, I was curious as to what the best way to wash it would be. Aside from the traditional spot cleaning/handwash method, what else is acceptable? Would dry cleaning be a bad idea?

I'm talking about this dress specifically:

But I'd love to hear all about experiences with washing embroidery/applique dresses!

EDIT: And I've also looked through the available Washing/Dry Cleaning/Clothing Care print lists, but I have yet to find this particular dress on them. :<

I am hoping to find photos of the Ribbon Short Pants from AaTP or anything similar in fashion. Any kind of pics will do as long as it is worn on an actual person (magazine scans, daily lolita entries, etc). Here is the lolibrary entry for ref:
http://lolibrary.org/node/5732

I want to see how these look like before posting up a potential WTB for a coordinate I'd like to put together.

Thank you very much for any help!

I recently discovered an Etsy store called 'Wear It Cuter,' where they make custom-sized skirts with a variety of adorable fabrics. However, I haven't been able to find any reviews or worn pictures of finished products, so I was wondering if any of you lovely lolitas might have some to share?
Collapse