Meta does a chocolate print! I actually kinda like it in Navy. he color scheme reminds me somewhat of Baby's Bon Bon Chocolat Dance Dance. More details and full line on their reserve page. 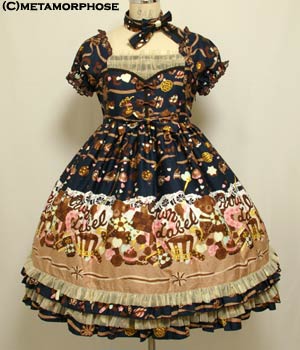 I've been planning to buy Misty Night Royal Game OP for some time; but I'm curious as of how it looked worn. I did try to look for some magazine scans unfortunately to no avail.

That's why I want to request some worn pictures of the OP, photo shoots or magazine scans (if there's any. I love collecting scans of my favourite prints XD)- especially the brown colourway.

Thank you in advance!

Hi! I'm new to this community, but I've been lurking for a couple years. It feels strange to actually be posting now. :P

So I realize this isn't directly a post about lolita per se. I noticed all the wonderful sewing tutorials and for the most part, I noticed that the consensus is that it's very difficult if not impossible to sew JSKs, cutsews, petticoats, etc. by hand. I have seen in a few other posts that investing in a good sewing machine is wise. I do know how to hand sew and use a sewing machine, but I have stuck to hand sewing because of the problems that I'm having with my machine.

A few years ago, I was given a sewing machine for my birthday. The problem is that I get too frustrated with sewing because once I have everything set up the way that it should be, the bobbin blows up into a tangled mess of thread and I have to do rewind the bobbin and do it all over again. Is this a sign of my inexperience or a sign of a subpar sewing machine? What sewing machines do you recommend for sewing lolita clothes?

So, I'm kinda new into wearing Lolita (and this is also my first post, please tell me if I did something wrong) and I need advise on a petticoat. I really have no Idea where to buy one!  Some months ago I bought a petti for my first dress, but it doesn't fit my other dresses at all. It's way too short and you can see where it ends. That's why I'm going to buy a new one, but I don't want to make the same mistake as I did before. Since I'm also planning on buying some skirts on bodyline.com, I thought about buying a petticoat on the same site but my friend has also bought one there and says that they loose their structure and you can't use them for a long time.

Anyone some suggestions for a beginner in Lolita?

Last Winter I ordered some things using TaobaoSpree and didn't have any problems. It worked out fine.
I placed an order through TaobaoSpree at the end of last month. It was a kind of large order with 2 other people, totaling about $350. At first the communication was very fast. I sent in the spreadsheet and the representative checked the items, telling me a couple things were out of stock and getting extra measurements. The last I heard from them was July 4th.
I understand it takes a while for everything to get in, especially since I ordered quite a few small and cheap items. Also, I guess they didn't really need to update me when there was nothing to update about. That was different from last time I ordered, so last week I sent a message asking how the order was going and if they had an idea when things would be ready to send me.
I didn't get any response, so today I sent them a message saying that I was getting worried that I hadn't gotten a response to the e-mail I sent last week, and asked if there was any problem with my order. I just sent that a few hours ago, so I haven't gotten a response.
Has anyone had problems with them lately? I searched on Google for problems with TaobaoSpree and this review came up. Look at the second comment. I don't really believe it (it's completely outrageous and I haven't heard anything like that before), but I'm really worried now! I don't know what I'd do if I expected cute clothes and toys and got a box of old rugs and newspaper!
If anyone is dealing with them now or has in the recent past, please let me know how it's going.

Edit: Someone pointed out to me that the person accusing them of sending them a box of rugs and newspaper was probably a competitor, especially since no one's heard of anything like that happening before.
I sent an email to Susan, so between that and re-sending the email to my agent I figure that's all I can do, and all that probably needs to be done.
Thanks for your help :)

Edit #2: I just got an email from my agent. She said my last items just came in today and got my shipping info. Thanks for the info.
Do you think I should delete this post now? I don't want people to look at this post and think the company's untrustworthy because of a delay in communication.

I will soon be moving to Okayama for at least 7 months and was just wondering if there were any more lolis around the area? I know there is an active Tokyo community but it's a bit far for me to travel on a regular basis (I think!). I think Kyoto, Hiroshima and Osaka are my best bets but until I know exactly where I'll be living I can't work out travel details. But anyone around that area of Japan would be wonderful! :)

Please get in touch if you fancy a few meets!

Can you believe it? It's time to vote for a new month of EGL banner art! This month we have 9 talented entrants, so head on into the LJ-cut to have a look and choose your favorite! As always, this poll will be open for approximately 48 hours, so the sooner you cast your vote, the better.