I received a nice little package from Kawaii Goods the other day, their items are adorable! Perfect for sweet and deco Lolita.
Here's my review!
http://moonkeki.blogspot.com/2011/10/kawaii-goods-review-lots-of-pictures.html
(My blog is mostly Lolita related so feel free to follow)

Hello~! I wondering what a gyaru hairstyle would look like in a sweet lolita coordinate. I think hime gyaru is so cute, but gyaru is a bit different from hime. Do you think it would look nice on lolita? I have no idea. Thoughts, anyone?? ^-^
I am recently thinking about buying some Lolita related magazines and books from Amazon Japan. Does anyone know if they ship to Canada? Do I need some kind of shopping service sort of things? Do you pay from your credit card? How does the process work?

Thank you in advance.

Hi,
I was wondering if anybody could identify this coat? From which brand is it?
( Collapse )

I recently got a yaplog (Japanese blogging/social networking site. REALLY cool. Worth checking out even if you're not fluent in Japanese) and I've found a few lolitas on there, but I'd like to know if there's more. The fact that the site has "Lolita" as a blog design category really makes me think there are quite a few!

Does anyone have any links to any lolita's blogs on yaplog? I'd like to know so I could follow their blog obsessively like some kind of creep look at pretty lolita pictures and practice my Japanese while I'm at it. I saw the Japanese lolita's blogs post in memories but only a few were on yaplog and that post was from yeeeeeeeeeeeears ago, so I'm hoping a few more lolitas have sprung up there.

I've fallen in love with this dress (Trianon Party from Candy Violet), but I've heard some pretty varied opinions about the brand's work. Does anyone have any info on this particular dress, or any worn photos? (I'm especially interested in the length, as I'm a short person and have to be careful about that). Anyone own it or seen it in person?

I've recently moved to Canberra and was wondering if there were any other lolis here? I'd be interested in meeting up with you guys, if there are any of you! It seems like I've seen Lolitas from all the other states/territories but none from the ACT. So, where are you all hiding?

Hello! I've been making some Angelic Pretty style plastic jewellery, mostly to match Wonder Story because I wasn't the biggest fan of the accessories AP released with the series. Let me know what you think! :) 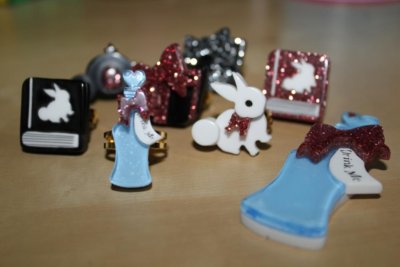