There's this beautiful victorian style dress Momoko wears in Shimotsuma Monogatari. I've no idea what it's called or what brand makes it so I can't search for pictures of it. Does anyone out there know, and/or do you have any detailed pictures of the front and back?

as a relaunch of angelpolis (group of vancouver, canada lolita friends), tamulove hosted a lovely picnic on Aug 29th

food and frilly photos onwards! (link to my personal LJ)

Do any of you have Japanese/Korean/etc hairstyles how tos scans? Like the ones that show step by step on how to do your hair. I've recently became addicted to collecting scans from japanese hair magazines or from any asian magazines in general because they're so pretty and different than let's say seventeen magazines. And well I'm looking for ways to change up my usual hairstyle routine. I'll take anything that would be considered classic,sweet,hime,and even casual.
Thank you very much!

Also with the finished version of my entry for the banner contest, if anyone is interested :)

I want to try something fun, So, let's play a little game! I want you to pick a lolita brand. Now, close your eyes and picture what you think of when you think of that brand. An outfit, or an accessory, or a specific print, or a specific item.. whatever it is that just says "this is ____ brand". Now, using lolibrary, hellolace, any other resource you wish and/or your own creativity, find orndraw the closest image you can to what you were thinking of. It can be a stock picture of a certain item, or a coord or a scan of a coord in the GLB... a sketch, whatever you want. Post the name of the brand you were thinking of, and the picture, or a link to the picture. 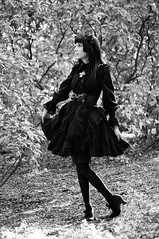 For my first shoot of Autumn, I thought it would be fun to do something out of the norm for me. Usually, I'm a Bittersweet or Sweet Lolita, but I've always really admired kuro. I also just got some new i.Fairy lenses, the Hana Grey. With Halloween approaching, it seemed the perfect time to bring out the "darker side of ElleJay," haha.