With this month's general theme being tutorials, I thought I'd share another video with you. This time for a dirndl skirt. ( Collapse )

First off, I want to apologize to those whose comments I deleted when I originally made this post late last night. I made a few wrong decisions with that and I am sorry. I did not know that this method is considered shirring as well because I've never seen it on ready to wear. I learned something from you and I thank you for that. I'm sorry.

So I was incredibly lucky and somehow managed to snag AP's yellow Milky Planet skirt as my very first brand skirt! This thing is absolutely gorgeous, I didn't realize how poofy it would be on its own without a petti. Anywhoo-I've posted my first casual coord under the cut, I'd love to hear your opinion!

Now I'm not a fan of cats, but I am of make-up. I thought I'd share this as I've never seen anything like this.
It's a limited edition lipstick by Paul & Joe with the tip in the shape of a cat head. This is very cute (if your a cat lover) or if like me you can appreciate the uniqueness of this. The packaging is very cute and there are three shades to choose from.
However due to it's limited edition, I'd never use this so I'd much rather go for the Alice in wonderland set than this. But I still think this is worth sharing.

Seattle Lullaby Moon Meet Up is THIS FRIDAY! Please click this link to be taken to the information page! 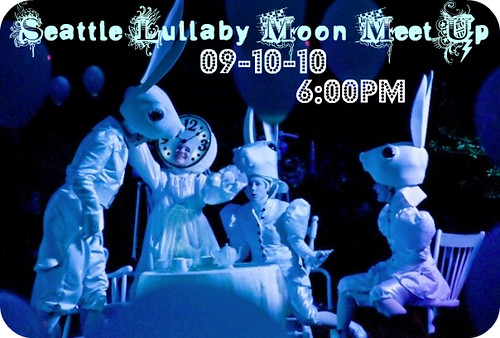 Swap Meet and Picnic this Sunday! UPDATE!!
What: Lolita Swap Meet and Potluck Picnic
When: Sunday, September 12, 2010 at Noon
Where: 23rd and P St NW, Washington, DC (There is a small/medium public park on that corner, we'll probably be somewhere under the trees in the shade.)

EXCITING NEWS...
As an update, there will be two people accompanying us to the swap meet, they're making a documentary. I met them at Otakon last month and they interviewed myself and Melissa, originally they were making a documentary about Otakon and Otaku-dom, we were the first and only lolitas that they talked to, we told them about the fashion, what we preferred and what other people preferred, we told them about lolita meet ups, I kept in contact with the camera man and he expressed interest in following us along to a lolita meet up outside of an anime convention. If you want to talk to them in an interview, you can, if not then you will not be pressured into talking. ^__^

RSVP's are not necessary. ^_^ Just come to have fun. I should be bringing plates, napkins, silverware, and cups... also please bring blankets not only to eat on, but one or two to lay out your stuff. ^_^date

Hello! I hope this is alright to post, the Japanese website poupeegirl just released some new classic-lolita looking items today, and I noticed this one...

So I'm going to be doing a magazine spread on lolita for my graphic design class and I was wondering if any of you might have an idea for a title. I haven't decided on whether or not it will be on a specific type of lolita, or the entire community.

Any suggestions on either article titles, subjects, or anything else you may think of will be greatly appreciated. Thank you for your time everyone. ♡

Click on the banner to find out all the details :D
(x-posted on

oz_lolita  and posted here with the permission of

Good day to all! The idea for this serie of jewelry got in my head a long time ago, but two days ago I finally became so inspired by this month's theme that I couldn't wait any longer, though I had other plans. So, presenting clams and pearls as the first steps to my mermaid-themed collection.