Hey everyone I am new, so HUGE apologies if I do anything wrong.
( Collapse )
Alright so, I am going to start a lolita vlog very soon. I should be updating at least once a week, and aside from reviews of products, I wanted to upload reaction videos (like when I get a package and open it up and then squeal or something), skin care, nutrition, sometimes the darker things, brands, etc.

I was wondering if there's anything in specific people would want to see addressed within the vlog?

PS: I'll put a post on here when I make my first video (The reason I haven't yet is because I wanted to dye my hair before I did it, and my appointment was moved to Wednesday, so two days~!) because I would like some feedback so as to make the vlog more enjoyable by all. :)
My username on youtube is MissAliceReed, just so you know. :D

ALSO: My first video is going to include a brief summary of the lolita fashion subculture, so I was hoping I could get a consensus on an accurate definition and history of lolita. (I don't want to step on anyone's toes with a wrong definition/ misinterpret lolita to the outside world)
So what are important things to mention when discussing the history of lolita fashion?

Another list would be: Things to avoid discussing. What are some things NOBODY wants to hear?

Thanks people, I really appreciate it. :) I want to make this vlog fun for all.

For the Qutieland Frill rocking horse shoes, how accurate to size are they? I got tea parties in a size M so im not sure which size to pick for these.

Can someone help me and if you own them, how comfortable are they :)

Thanks for the help. 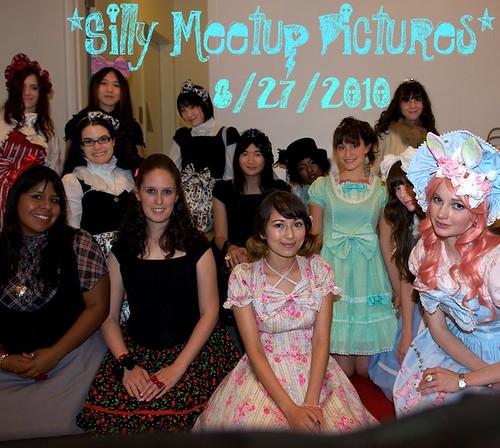 I made the skirt as a practice project; it's the first item of clothing I've ever sewn with a sewing machine (I used to only hand-sew). I simply adore the fabric; I thought that the olive green would be perfect for Classic or Steampunk Lolita.
It was pretty simple to make, and I'm quite happy with it.

I purchased a half-slip from a thrift store yesterday and ripped the seams partway to form the legs. I gathered the eyelet lace and dyed it cream with tea. They start at the waist and end at the knee so they are rather long, but I imagine they'd be wonderfully warm in autumn. :)

I am only a beginner at sewing, and there are so many talented seamstresses in the community, so I'm looking forward to your comments and suggestions!

Hi!
I am looking for a website where I can get lolita dresses and casual lolita clothes for cheap. I've been buying a LOT of dresses now but the're too expensive and are starting to be a problem. I'd like to keep buying clothes without having this problem. If anyone knows I will be eternally grateful :D

I was wondering if anyone has gotten their items yet or at least a tracking number? I order two separate times during their sale and haven't even gotten my tracking number. I know they have a lot of sales, but I'm wondering if they're so busy they don't have time to add the track number or if they just haven't gotten to mailing my stuff out yet?

Its all FIXED and accepted just got the email now ^^

So, inspired by this outfit and in love with these L.A.M.B boots, I went on a search for something similar.  Here are some things I found as well as some ideas / inspiration.

1)  Pretty similar to the L.A.M.B. ones in my opinion.
I found these Nana boots which were apparently available at Hot Topic according to the listing?  LINK

2)  Off-brand knee high kicks in white.  Then buy the laces separately.
I found these boots and thought it might be cool to buy some extra-long black laces online:  LINK

3)  Or, if you prefer the black and white look or the all-black look...
And for those who prefer black boots, I found these with white laces:  LINK
My sister has taken black kicks similar to these, purchased black laces, and colored in the white parts with sharpie -- cheap, I know, but there's probably a better way to do it to get the same result.

4) For a DIY type suggestion, what about a tongue-less look?
This just came to me randomly.  And it really depends on how large your calfs are... but what about cutting the tongue out of the boots shown above (or something similar) and creating a punky take on the tongueless Victorian Maiden boots (or the TUK copy)?
Here's a picture of the TUK version, not my Poupee, but the only photo I could find.  And I couldn't find a picture of chucks / kicks with the tongue cut out.  But here's an example of what can be done with just scissors (it's a pretty cool tutorial too): http://nyshoespy.com/2009/08/28/another-diy-idea-for-shoe-awesomeness/   I would cut the tongue completely out like shown in picture 3.

5) What about a red and black combination?
I had to include this shopping find because I've never seen anything like them before and thought they were pretty cool, good price too.  Demonia Deviant.


EDIT: Fixed the link issue.  HTML is not a talent of mine... haha.
And some keywords -- punk, street casual style

Anyway, as usual, I hope at least one of these has inspired you.  Have a great week!

I was gonna wear my first homemade co-ord to local fair this year but as usual the fair has brought the weeks worth of rain. Sad times.

And I live in Wales, where it never stops raining.


So my question to you gals and guys is: Does anyone know where I can find any cute rainwear such as coats, umbrellas and wellington boots for a sweet lolita?

Unfortunately, I can't afford burando so any off-brand things will be fine.

Any tips will be greatly appreciated!

I saw this head dress from dollscope (I do believe) and thought it was adorable.