Hiya! I just joined this community recently and haven't posted at all. This is my very first ever entry using a cut! (lol) It's cuz I'm so bad with cuts it's sad...

It took me quite a while to find pics of my outfits...and I'm sorry because I couldn't find any pics of me in lolita... =(

But, all the same, please look and comment! (Btw, I have zero confidence in my looks so please excuse me for not showing my face). :) Sharing some photos from a shoot that I did last Saturday and the theme was Fairytale Villains. Yes, it's all about the mad, bad and dangerous to know women in our favourite fairytales this time =) 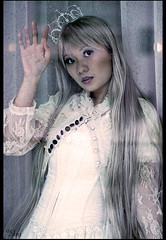 Now that the sale's over, there's going to be lots of new fall stuff coming out so make sure to check the website every now and then ;)

I know this must seem like a really silly question, but i'm new to lolita. Is it okay to have your skirt around mid-calf? my skirt isn't floor length but i wanted one a bit longer so...Is that fine, or just weird?
dose anyone own this skirt?
http://www.bodyline.co.jp/bodyline/showProduct.asp?id=4766&pageNumber=1&pageStop=stop_6&noSubType=N

and if so how much give dose the corset part have? dose it give alot more than 76cm or is it about as much as it can go?

Hello~
I'm a student at the Art Institute, which despite the name isn't that artsy XD
Anyway, I'm an animation student, but I don't really enjoy it. I enjoy drawing realism more but I haven't done so in such a long time. I was wanting to draw again and decided that I wanted to draw Lolitas because I love drawing clothes, and what better than Lolita clothes? So I was hoping I could get some lolita photos that anyone wouldn't mind donating so I could draw them. I didn't just want to go through and google and draw anyone without their consent, so I figured this would be better. I don't have any preference other than either a really nice portrait, or an interesting pose or angle~
This is mostly for practice, but if you would like to see the drawing of your photo, I wouldn't mind at all.

Incase anyone's interested.
http://www.cutoutandkeep.net/projects/mini-lolita-parasol
I just wanted to upload these things before August was out because I really like the idea of vintage. :)
( Collapse )
( Collapse ) I've enjoyed looking at other people's this month so I thought I 'd share mine!

I didn't realize how much of my wardrobe is inspired by lolita! Anyhow, I hope you enjoy.

Theme post time! I really liked this theme, but I realized that I didn't have hardly any pictures of myself in normal, everyday clothing. So I took pictures whenever I thought I was wearing a representative outfit during the month, and here are the results!

Just wanted everyone to know that I appreciated your input on the issue I thought I was having with fururun. I thought I might not get a chance to touch base with them about the shipping address so I can have someone sign for it if it'll be arriving after I leave, but it appears that things will work out fine afterall. I deleted it because I didn't want there to be any negativity about them if they didn't do anything wrong, which they didn't. I replied to everyone, but since the post is gone, you might not be able to read my response, lol. Thus, this update. Thankyou!

(Mods please remove this if it is not allowed ><)

This is my newly created fashion blog that concentrates mainly on Lolita fashion and some inserts of other Japanese fashion such as Gyaru, Mori Girl, etc etc.

PS: I will be holding an item giveaway soon so stay tuned for it!
Collapse