I was wondering if anyone owns this JSK and if so if they have pictures of it worn?
I think it's really pretty, but I fear it might be really short on me and I would like to see it on a body rather than a dressform if possible.
Also, if you own it, could you shed some light on the bodice fabric? I'm having a hard time telling if it's a lace overlay or a brocade from the pictures.
Pic under the cut for those who don't know the name:
( Collapse )

Hi, it's me again))) For all those sweet lovers I came up with a new batch of items.
( Collapse )

Hey everyone. I'm in search for some of the old Anna House design stock photos but none of the stock websites seem to have them. It would be back during late 2008 that the designs I'm looking for were around. Is there anyone that happens to have the stock photos from that time period? The two dresses I'm specifically looking for are one with a green flower print and a the other a peach flower print. Thanks for the help (I'm trying to make my sales post as visual as possible since my camera skills are shotty).

Because my lack of being able to read Japanese, I kind of was unaware of the meaning of the 2nd stage.
Someone translated for me and it appears that we can only win of we get "supporters" for Misako.
This means other people uploading their video and picking Misako as their Idol.
Would people from here be willing to do this??
I think it would be also very fun to get a overload of Lolita's dancing on the Fit's channel haha!

Under the cut I'll explain how to submit.

Does anyone own Meta's Regimental Stripe JSK and could give me some info on the fit? Specifically, I'm hoping to find out the bodice length from shoulder to waist and whether it fits okay a bit over the flat measurements (about 1.5-2" in the bust and 1" in the waist). Any help would be much appreciated :)

Uhm... I'm new here on the EGL, so I wanted to introduce myself with some pics from my themed birthday party ^___^ 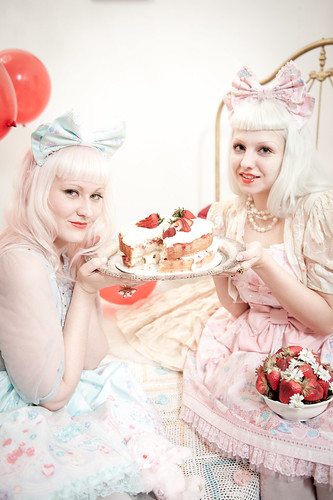 Hello Lolis! Dances of Vice is celebrating its 3rd year anniversary with The Birthday Party Party in NYC, and you are invited to join us for an evening of cupcakes, dancing and cocktails in your sweetest birthday lolita best. The event will feature live jazz and swing, burlesque and accordion, as well as a vintage pinup fashion show by DOV birthday girls Elena and Sara (above).

Visit the Dances of Vice website for details, hope to see you there!

I have some quick questions! ^_^
I've been wanting to order from taobao for a while now, and I'll be going to China (Beijing) in October. I'll be staying there for three weeks, probably in a hotel or hostel, since I'll be visiting China for my studies, and with my classmates. I have some questions about ordering from Taobao while in China! ^_^

I've been wanting to us the nurse-lolita pattern from volume 3 of Gosu Loli for a while, but I'm wondering if anyone here has used the pattern and could comment on the sizing. For the medium and small sizes there seems to be 12 cm (4 3/4") of ease at the bust and 6 cm (2 3/8") for the waist. Did that work out for any of you? It might be my inexperience as a seamstress but to me it sounds like a lot, even thought the pattern has waist ties. Although I do want the final garment to have a 28" waist like the medium size calls for, I'm worried that it's going to be way too big at the bust and shoulders.

TL;DR: has anyone made it and found it too big at the bust and shoulders? It would save me some time drafting. ^^;

Im going to sell some things of the sales here, But Ive never done it before, How do you use paypal to recieve the payments I tried reading the F&Q on the Paypal site but its really confusing @_@.
Would anyone be kind enough to help?

I juste went to the japanese website of Angelic pretty and guess what? They uploaded several Melty chocolate dresses, jsk and skirt. I don't read japanse, but obviously, it's a re-release.
Is this the first time AP re-release something??? Because it's the first time i ever saw them do a re-release...

I like wearing lolita very much but in my country (Malaysia) it's always hot and humid 365 days a year so it gets too hot to wear lolita most of the time.

Also, when in lolita I garner too much attention on the streets and I prefer to stay out of the limelight because it gets too tiring. I wish I could wear whatever I want without people staring at me 24/7. OTL
( Collapse )

I don't know what it is that draw's me to lolita - other than I've always been the type of girl who would go through her grandma's wardrobe and wear floofy things. I can't begin to describe my day to day style, as I normally just wear what fits my mood (lately it's been jeans and a tank top because Georgia summers are so insufferable!)