I was really careless when I put on my dress and ripped out/apart some of the tulle around the bodice area! * still can't believe I did it*
The tear is easily 6 to 8 cm long and looks quite obvious.

Is there some way to repair tulle that's torn? It's really fine and thin...

Removing the whole panel of tulle from the bodice would be my last resort because the dress is brand new! (;____;)

Thanks in advance for any help/advice that you can give. m(^_^)m

A while back I believe there was a post about using out community to do some good in the world...

Well all you need to help feed hungry rescued animals is to click this link! (or the kitty pic) And then click on the button~! 100% of the proceeds from the ads on this site go to charity. Clicking once can give .6 bowls of food to rescued animals! The best part is, you can click there once every day. :3 Make sure to bookmark it!

Have you ever volunteered? What were your experiences like?

Feed people too! Click here to play a word game for rice! Link by bijoujou~

Answer questions to feed animals at FreeKibble and FreeKibbleKat! Link by huffie_puffie~

Hello fellow Lolita's!
For one of my Fashion Design classes we have to do a marketing plan--and I have chosen to do it on a Lolita dress. If you have the time would you please fill out this survey in honesty because I need to know demographics---In the future this may become a reality too so this will really help me! :D Thank you!!
( Collapse )﻿

A new tutorial for those of you who wear wigs!
( Collapse )

I know this sounds like a weird question, but what is the perception on wearing let's say, a recognizable Btssb jsk to an Angelic Pretty event or store? Or vice versa?

Are there different perceptions depending on the country the event is hosted (Japan vs USA)?

Are there different perceptions depending on whether or not it's a competing brand (AP which is more sweet vs Victorian Maiden which is more classic)?

I was curious about a certain accessory to a lolita outfit, more specifically a classic or sweet style outfit. I know that bows, bonnets, and headdresses are common, but what about using a mob cap?

So far I've been taking my dresses to my dry-cleaner, who is wonderful, but the service is rather quite expensive and that's inhibiting me from wearing my burando as much as I'd like. So I was wondering if anyone who owns these dresses have hand-washed them -- with or without special treatment, salt or vinegar.
Thank you!

( Collapse )
( Collapse )﻿
Me and three of my best lolita girlfriends went thrift shopping yesterday. It was so exhausting. To mention that I had a hangover for drinking until 4am the night before, having my first day, and getting a fever. It was awful but I recovered quickly for I got lots of awesome finds.

example : cherry berry bunny  or milky chan print
will these dresses/increase decrease in value bought second hand(resale)  or retain the original store price ?
what is the average price of a used print jsk?

are OP's or JSK more expensive at resale ?
why is the sugary carnival print so sought after ? do people really admire the artwork on it or is it for other reasons ?

( Collapse )
I'm sure all of us have someone we look up to in real life. Whether it's a celebrity like Rihanna, or a humanitarian like Ghandi, there's someone in our lives that we look to for inspiration. Well, here's my question: what would your in real life hero/idol think of ?

I'll start! My current idol is , the lead actor in the doctor drama House, M.D. As a person, I think would think that it's pretty cool. I'd love to have tea time with him while dressed in ! X3 As Dr. House on his show, though, I think House would think that is weird, and he might even criticize it as something I do to make up for the lack of interesting things that ever happens in my life (of course, he'd totally be snappier and wittier about it, lol)

I also find (no joke!) as an inspiration for me. She'd probably look at as an extremely selfish and vain thing, but being , she'll word it in a nice and encouraging way that will totally enlighten me to throw down everything and join the Calcutta nuns. (Exaggerated, but you know what I mean.)

Black Alice held another tea party last Saturday, with a total of 31 attendees! 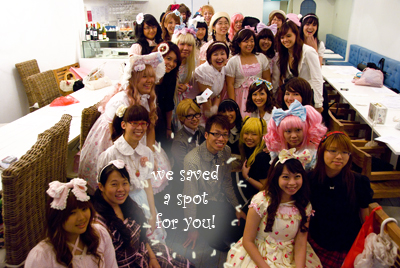