...Of your favourite dark purple clothes and co-ordinates! Since I've upped my sewing skills recently, I'm ready to try something different with the few meters of dark purple and white polka dot fabric I've got in my stash, and some photos would be a great inspiration.

I've been meaning to write up a review for this commission for a while, but never got around to it. I figured now's as good a time as any, especially since there seems to be a lot of bias against this seller on the community right now, and especially since I've never once had a negative experience when dealing with 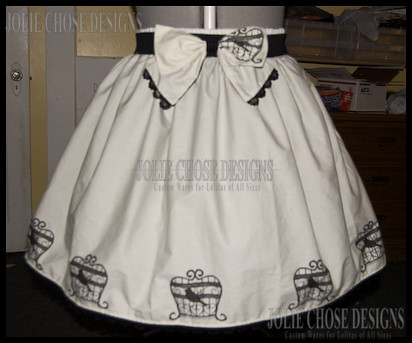 ( Collapse )
Sorry about the cut. Can't internet today; I have the dumb.
EDIT: A couple of notes, since the mice are talking: The repeat on the fabric came out really, really weird. Like, it was only about 18 inches long, and in case anyone doesn't know, I'm tall (and fat) and need my skirts at, like, 25 inches. Even if it looks strange to you to have a black waistband, there was really no other way to do it, because the print was so weird that there wouldn't have been enough fabric otherwise. I liked the black waistband because it meant the skirt could be longer, and it was under my blouse anyway and didn't really matter. Also, the back of the waistband was shirred; when worn, the birdcages were evenly spaced.

I was watching this week's episode of Shear Genius and during the elimination challenge, I saw the contestant Janine wearing a very familiar looking skirt. ( Collapse )
Are wigs something lolis buy? (I've seen some wigs for sale in online shops, but don't know how many actually buy/wear them)

I have some I'd like to post on the shopping comm, but am wondering if they would even be looked at.

What colors and styles do Lolis look for, and what are absolute no nos? (This will also help me if I decide to go the "I can't possibly style my hair that way..." route.)

This entire outfit is off-brand, I've assembled it from an antique store, a con, a yard-sale, and Hot Topic >.>

Anyway, here it is!  And yes...that IS Jack Sparrow in the background...

( Collapse )
As has been made clear in this post, many

talia_speaks's operation as a commissioning seamstress and as the admin of the Loligoth Database feedback website.

These concerns deserve to be addressed openly and with the opportunity for members to give feedback on how they have been handled, so I am making this post to ensure that everyone is on the same page, has a chance to give their opinion, and to know the outcome. I will address the two concerns separately, since they are quite separate issues.

talia_speaks's commissioning, we've decided that the fairest option in this situation is to place a ban from the sales community for either a month or until she has shown satisfactorily that she has cleared the backlog of commissions and shipped all items to her current customers, whichever is the longer. If you are a current customer, please message me with the details of your item and how long you have been waiting, so that we can add it to a list to check back with her on completion.

So far we have not developed a complete system for dealing with commissioners who run behind and have not completed items in time, have sent out multiple mis-sized or shoddily made items, etc. We will be developing a system to run with our normal warning/ban policy and it is likely to look similar to the way this situation has been treated. For first offences, I would imagine that a warning will suffice, but due to the severity of this situation with multiple offences, a ban has been put in place.

Feedback Databases:
Secondly, regarding the Database, this is a more complex issue. We understand that

talia_speaks has stepped down as admin and remains on the site only as the owner. She has chosen a new admin,

akuneko42. However, I also understand that there remain concerns over fairness, transparency and bias around the database. This is not something that we as mods on

egl_comm_sales have control over. The Loligoth DBS is a privately-run site and in all honesty,

talia_speaks has the right to run it as she chooses. That said, we can definitely understand and support the desire for a non-biased feedback venue.

Several options arise at this point. The first is to stay with the current database system and work with Talia and the new admin to arrange more moderators.

The second is to migrate to a new feedback database, run by the same mod team as those of us who currently mod

egl_comm_sales. This would likely need community support for funding. We would also need more volunteers for mods as we're currently understaffed as it is. I understand that there are options of coding a more easily-run site than the current DBS. We would still need to discuss the possibility of transferring current feedback, as we would prefer to do this only with

talia_speaks's permission. While not everyone agrees with the way she has handled herself in regards to these matters, I think we do need to understand that in setting up and maintaining the database thus far, she has done a great deal of work for the community.

milkypop) is to set up an entirely new egl auction site involving sales or auctions run via this software. This is the largest step and would involve a complete overhaul of the way sales are run, moving them entirely away from the current LJ-based direct sales system. While we can see the benefits to this system, it would be a lot of work and again, we would likely need some help with moderation as well as with running the site and with funding.

We would also like any other suggestions for solutions. Please make them in this post with as much discusion of how you would like it run as possible. It's likely that once we have settled on the most popular options, we will make a poll, then take into account the amount of work for moderators in setting up the new system. I stress again that any changes will need the help and support of the

I have two further points to make. The first is regarding feedback and ties into this post. No matter how good the feedback system, it's only as good as the feedback information left. It is everyone's individual responsibility and in everyone's interest to ensure that they leave honest and clear feedback about as many transactions as possible. If you have a negative experience, you need to make this clear to prevent other people suffering the same thing.

This relates to my final point. If you have concerns, or a negative experience either via the main community or from a transaction on

egl_comm_sales, please, please let the mods know. I have been asked why the mods haven't addressed this issue already. None of this has been taken directly to a mod, either via PM or the Anonymous Report Center. We are already running with only six active mods due to some of the team resigning for various reasons and new mods not yet taken on. We are volunteers and all have busy lives outside of this community. Without your help and support to keep things running smoothly, it's not fair to ask us why we aren't following up on issues that have not been brought to our attention.

Making public call-out posts after building up an issue elsewhere online is not the most productive way to get any issue resolved. I would expect that issues of this nature are at least brought to the mods directly prior to any public airing of grievances, so that we have a chance to discuss and react as best we can.

I'm completely head-over-heels about ballerina RHS, but my feet are way too small. About a US 3, 19cm-ish. I've only found US 5-5.5 as their smallest size, in different brands (I know, maybe the original VW ones could be custom made into my size, but I don't havve 400-600 dollars to spend on shoes).

What can I do? Are there any brands which sell smaller RHS? Could I normally walk with a US 5 RHS with some filling or something? And, does anyone has any experience in asking a city-shoe maker to make RHS? o.o My grandmother offered me to ask her shoemaker to recreate a pair of white RHS, but I'm so unsure of how they would look.