I'm in a bit of an odd situation...we're really broke right now, but I got a $70 amazon.com gift card for Christmas and I've been commanded to ONLY spend it on non-necessities. Therefore, I really want to use it to purchase a few things to wear to my first ever lolita tea party.

I have already picked out the petticoat I want (a malco modes one) but also wanted to find some shoes. I want flats, as I'm really REALLY frickin tall, and I would like them to be white or light purple. My searching skills don't seem to be up to par tonight, as all I'm finding are point-toe heels >_< does anyone have any suggestions/recommendations?

For reference, I'll be wearing a medium-dark purple high-waist skirt with white and lavender trim, a white blouse, and a white petti. Does anyone have any sock suggestions, also? I need ones that will fit my thick calves (18 inches of bicycle-riding muscle...sigh).

After an epic battle with the Post Office (and, I mean epic), I was able to get my LP.( Collapse )

So I modded my Milanoo blouse.

Has anyone else's lucky pack arrived? Post your loot ;D 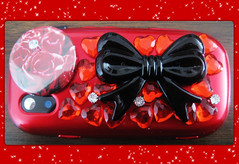 and I want to buy a really pretty dress for valentines day to match my phone. Im not looking for a red and black dress. I want a really elegant classic solid red dress that I can add my own accessories to. Any ideas?

I wanted to shop at victorian maiden but the site doesnt load for me anymore anybody having that problem?

EGL fashions and their subsets are inspired by Victorian (which came onto the scene just after Regency styles, in the early-mid 1800's) and Rococo (styles popular in the mid-late 1700's), in England and France, respectively. Adapting these styles to modern lolita is one of the more interesting things about the fashion, I think, and I'm constantly on the lookout for authentic fashion plates and research from the era when I'm making something new.

But I've always wondered - during the early-mid 1800's in America, there was a similar but still wholly different fashion movement happening. In the American South, fashion was known as Antebellum.

Antebellum fashion is characterized by hoop skirts, pagoda sleeves, capelets and shawls, floral decorated bonnets, pointed drop waists and near-off-the-shoulder bodices. Quite a lot of the antebellum aesthetic could successfully be translated into EGL, especially the styles specific to little girls of the period. Young girls in antebellum fashion also had shortened skirts, but a marked difference is that girls allowed the lacy bottoms of their bloomers to show underneath their skirts.

What do you ladies think? Which aspects of Antebellum style do you think would translate the best? Are any of you as fascinated with this style as I am? I'm going to start making some sketches to see what could be pulled from this style!

I don't know how many of you crochet, but as I was wandering around Ravelry I found this lovely pattern for a fawn that looks exactly like Ap's Milky Chan!

Pattern is not free and can be found here: http://www.pepika.com/pattern-fawn.html

Have you lovely ladies seen the new Vivienne Westwood bags for the Ebury collection?

I just found this article on the New York Times website. It is primarily about the Japanese fashion industry and most labels' reluctance to expand overseas, but it makes passing mention of Misako Aoki's visits to other countries as an ambassador.

I'm considering getting a petticoat I KNOW will be quite shorter than my favorite jsk. I'm sending it back to be changed to 21 inches (the "skirt" part of the jsk will be 21 inches), but I have the opportunity to change my mind if I do so quickly. The petticoat is 15 inches, the meta organdie one, and I want it so much I'm not changing my mind about it. But this is six whole inches shorter than my jsk D:

should I deal with it, or is this a fatal mistake I should save myself from while I have the chance? I have never worn a petticoat that had been that much shorter than my jsk, have any of you girls? and... will anna house be pissed if I send them an email to change it even though I just sent a confirmation one? xD;;

Postet with the kind permission from

Having four years experience in offering a shoppingservice for
people from all over the world outside of Japan,
we can help you with any kind of order you need
to purchase from Japan,
through a webshop or at an auction (Y!Auction / mbok).

Don't long any longer for your desired items, you can get them
easily though our service.

Check our LJ for more information.
Any kind of emails are more than welcome.