We had a small meet and chat session at Dome Cafe last month, 19 Sept, for

kurasune who was visiting from Canada. So some really overdue photos coming up =D 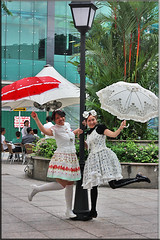 (I have searched through egl) Would anyone please show me what http://fanchaos.com/fanplusfriend/c1/Gothic_Lolita_High_Waist_Skirt_Suspenders_SP00081_01.jpg looks like on someone?

I know it's pretty new, but does anyone have another picture of this print? I can't see shit. D:

Do any of you ladies and gents live in Fort Lauderdale? I just moved here to attend the art institute here =)


Also! Okay so I found out that in FL that it's very hot outside and very cold in the buildingsXD (I moved from PA)
So what do you guys wear in this heat? I mean petticoats are just not gonna cut itXDD

Last Sunday, I ordered an Angelic Pretty cutsew from

the_rose_prince on the sales comm. Another user also bought something from her sales post. She only has +1 seller feedback, but she is also a NYC lolita so I figured it was mostly safe since I believe she attends meet ups. She said that the items would hopefully be shipped out before Wednesday. On Wednesday, after not hearing anything from her, I commented asking if it has been shipped out yet, and if not, when it would be. I totally don't mind if it took longer to get out, I just wanted to make sure that was it.

I still haven't gotten any kind of reply. I talked to the other buyer and she hasn't heard anything either. I know it's only been a week, but not hearing anything (especially when the item was supposed to be shipped out days ago) is making me a bit paranoid.

Does anyone know her? Can anyone help me get in contact with her, especially if you know her IRL? I'm in her local area as well and will be attending some future meetups if that helps.

If it's just that something is wrong with her computer or she hasn't had the time to ship it yet, I'm totally okay with that! I just... want to make sure nothing else is going on. I'm not claiming she is a scammer or anything, I'm just getting a bit worried and would like to actually get a response to her about the status of my cutsew.

Thanks to anyone who can help!

harlyharlekin (Hoa) for a photo shoot again :D We had lots of luck with the weather since fall is arriving. This time, we went to the castle grounds of Heidelberg. Hoa is such a sweet girl, so naturally, I enjoyed our shoot a lot. Please take a look ♥

I hope you liked this post, thanks for looking ♥ You can see more of my photography at ToxicTenshi@deviantART~

We've all waited for this day, and now it has finally happened!