( Collapse )
i couldn't really find an answer to this in the memories or tags. i'm starting to get more serious with cooking and am thinking about getting an apron or two. the ones i'm looking into would be full body, not just skirt level(i'm not sure if this has a different name, honestly i don't know much about technical terms of clothing outside of lolita). i was wondering from others experiences if buying a lolita apron wouldn't be practical for an actual use, such as if it stains easily etc. and if it'd be better to just buy a regular one with lolita influences. most of the stuff i spill on me is flour and sauces, occasional veggie stuff(i only cook vegetarian) as an idea of what might spill on them.

also, i am not planning on buying brand. so no worries over getting it stained. :)

So apparently, my absence from the internet has made my searching skills a bit rusty, because I'm not coming up with a decent thing!

I really want to do a Queen of Hearts themed costume this year for Halloween, a la lolita style. Thing is, I really believe it is too close to really get anything custom made, and I'm looking at a $200-$300 budget. It's been awhile since I've truly been involved with the scene, as well. So I'm out of the loop these days. Has anyone seen anything around, lately? I'm thinking of doing a corset with a themed skirt, and a sweet little crown, with the necessary accessories of course! A dress would work, too.

I was wondering if anyone has the stock photos and/or sizing information on the Alice and the Pirates Star Flocky JSK? I believe that was the name of it. It was a chiffon type material with stars all over it. Partial shirring in the back, and a large bow in the front.

I tried using the Internet Archive thing, but couldn't get anything to show up. Were the measurements listed on the site true, or no?

Many thanks in advance for your help.
Hey ladies I just wanted to let everyone know that we have spoken with our Japanese office to address the issue of trying on blouses, and they have agreed to allow it :) I hope everyone is pleased with the decsion.

Also, regarding our in store phone number, our phone is currently being kept on the floor, but once we find a better place for it we will give out the number, thank you.

Hi! Here are some pictures we took from the Baby the Stars Shine Bright, Alice and the Pirates, and Black Peace Now fashion shows at JPop Summit. We got a pretty sweet spot really close to the stage!

Misako Aoki for BTSSB! Hand over the hairbow and no one gets hurt! 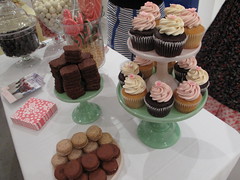 Looking to pick up some blouses or sweaters on the cheap? Alloy and Delias has some rather nice pieces on sale that could work with lolita if you're out of other options.

I've been looking for vintage shoes on etsy and thought I'd share some finds. They're not all ideal for lolita, but worth a look anyway I think.

(None of these shops are mine so this isn't a disguised sales post, btw.)

I've been a lurker for awhile now, and I've noticed something. There are many tutorials for headbows, hats, mini-hats, and just about everything under the sun except round headdresses. Forgive me if this sounds... well...ignorant, but just how are they constructed? I realize some are naught more than material circles, but the more elaborate ones well and truly baffle me. Any and all help in this matter would be appreciated.

Hi everyone~  I'm Kim, one of the shop staff from the San Francisco BtSSB store.

First of all, thank you again to all the lovelies out there for your graciousness and patience during our opening weekend, and helping to make it such a success!  All the Japan staff (including Mr. Isobe) were blown away by the turnout, and how amazing everyone looked.  At the tea party the designer, Kumiko Uehara, said she had never seen so many lolitas in one room (and I'm sure if there wasn't a limited number of invitations, there would have been many more).

Sadly, the girls and Mr. Isobe are currently on their flight back to Japan now, but before they left Miss Misako Aoki had a favor to ask of the Western lolitas...
( Collapse )
( Collapse )

Hi! I was looking through a list of indie brands to purchase my first lolita item.

So does anyone really badly want a pair of An*ten*na's bubble toed RHS? They're the ones momoko wears in kamikaze girls
but they don't make them anymore T^T *cries* i really wanted a pair, because i didn't really like the front part of the normal RHS before.. but now, i'm like in love with all sorts of RHS
wouldn't it be cool if there were replicas of momoko's RHS? cause i would really kill for one.. :D

I don't know how some of you get your stuff up so quickly, but here are roughly 200 photos I took from the weekend. Keep in mind that it's a comprehensive entry for my journal, so it's not all just lolitas, but theres'a good amount of you guys in there. Let me know the names of the ones I don't know or couldn't find on other posts so I can add them to the entry. Thanks!!

WARNING: There are roughly 200 photos

Some coverage of the New People building opening as aired on Fuji TV. See how many girls you recognize!

Also, I know a few girls including myself were interviewed by them, but they either haven't aired the footage yet or it wasn't used. If it shows up though, I'll be sure to post it! Enjoy!
( Collapse )
Post pictures, if you like. I can't, because I'm currently on a boat in Bermuda, but I love my Return to Tiffany's necklace. It's not lolita, but it's my favourite.
:)
Anybody everybody?
So~ I just received an email from bodyline asking me specific questions about my contest design entries. They ask for a lot of re-sizes on the images and well as a clearer image of the print I designed. Has anyone else gotten these emails? Is it common?

About 2 weeks ago, i posted on here about my hard time with celga.
It's been a month, and they've only JUST asked their japan side to get an update on my order. I HAD TO RING THEM 4 TIMES. The 3 times they basically said "no." They're very rude on the phone.
I'm worried, as my dispute on ebay doesn't seem to be doing much, and my worst fear:
i'll make a paypal case, they'll just send my blouse, giving the tracking code, automatically closing the case on paypal.
Today, they promised me a reply. I still haven't got one, i emailed them reminding them they owe me an update.
I'm losing sleep over it. I just don't know what to do, it feels like i'm losing, LOSING A LOT, no matter what. :(
Collapse