I'm getting so frustrated in trying to find someone to make an original lolita design!

I'm attempting to have a commission made of a Pirate Lolita dress I've made and its been difficult I got one quote that pushed it as high as $500!

While my budget is not big I've saved what I can for the project closer to $100 is far more doable at this stage. So far I've found fanplusfriend but in order to get closer to my budget constraints I would need to give up my rights to the design itself which I would like to avoid.

While it is a nice plus to have my work featured on their site and get a larger discount it is also not good because if I did want to make another I wouldn't be allowed to because they own the rights and it would be infringement.

So any suggestions? I'm looking for quality but also affordability I've gone from China to Uk and I'm even hitting up clothing manufacturers but I figure its very doubtful I manage to get 1 dress out of them at anything less then $600+.

Thanks for the help!


My mom and I recently went to a fabric store and she bought this fabric for bedsheets.
And I was wondering if this fabric would be good for a lolita skirt, or does it look more like bedsheets :D
If it can be made into a skirt, several suggestions before I start sewing?
Help greatly appreciated.

It was such a beautiful day... okay, it was a freezing cold day, but I wanted to enjoy the springtime blossoms before they all fell off the trees. So, it was time to do some Sweet Lolita pictures! As usual, my photographer was the lovely Géraldine Vincent.

In light of the fact that the admin of the LoliGoth Database,

talia_speaks is creating a Lolita blog, I feel that it is logical to bring up my concerns.

It has become clear to me that the database is no longer a place that can be considered truthful. This is based on my experience, and I would like to hope that I am the only one being targeted with this, but that seems unlikely.

To summerize, I left negative feedback in the database, and she responded a few weeks later that she was removing it based on some information that she had received from the other party. I offered to alter my feedback to reflect this, but was denied, even though my terms of sale clearly stated that bad feedback would be left in this sort of situation. I checked the database at that time and found 2 pieces of feedback that seemed suspicious (one that was feedback based on not liking the product received, one that had false information in it) and reported them to her. She said that she would look over them. This was approximately 2 months ago. After a month I sent her an e-mail asking about the status, and was not responded to. During that time she has posted on several communities and is now talking about starting a Lolita blog. Since she has time to do all of these things, I would assume that she has the time to check on things in the database.

EDIT: Well, apparently I'm the only one who has an issue with the database, so I fold. Say what you will.
I guess my major concern is the communication issue. If talia had let me know what was going on, we wouldn't have this problem. Even if she was taking care of issues and contacting people, if she doesn't reply to me and let me know what is going on, I feel like I am being ignored.
I accept that I am not a perfect person, and I don't even really want the feedback removed; if I deserve it, so be it. But I would like to be informed about these things when I have contacted the admin. This is not just about the feedback for me, but feedback that I left that was removed.

Perhaps I jumped the gun in making this post, and for that I apologize. I am not in the best place right now, and should have known better. It was stupid on my part. I would delete the post, but that would look sketchy, so I'll leave it here with my apology.

After reading this entry on a pair of VM inspired boots by Pleaser, I decided to order a pair for myself. The warehouse is based out of California, so I got mine in a mere 2 days. I figured I would make this little review post for some of you that were on the fence about ordering them. Perhaps I can help you make up your mind. 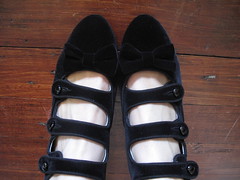 I know this sounds stupid. But, I have to ask anyway. Let's say you wear a JSK, the essential blouse underneath (long sleeved) and a Lolita hat. I don't mean a mini-hat. Some sort of medium-sized hat that is worn on the side. Is it still appropriate to carry a parasol around even though almost your whole body is covered and you wear a hat (AatP style, you know with the feathers and stuff *laughs*)? I mean it's not a big regular hat so it doesn't hide your whole face from the sun, I just don't want it look stupid either, you know. What do you think?

Next question: Unless my memory truely has problems, wasn't it a list or a community that somebody proposed to open for people who do art  commissions? I think I saw something similar to that a while ago. I checked in the memories and the list of communities, but it's not quite what I'm looking for, plus they pretty much are not active anymore. Was it just my imagination or what? If it's the case, where would you suggest me to go for "Lolita artist shopping"?

Sorry to bother you with questions that might have been asked before and thank you for reading!

I'm desperately looking for a clearer and if possible larger version of the image below the cut (or if anyone owns it and is willing to scan it that would be great too) :

I recently found a denim skirt at the thrift store. It's a knee-length dark denim skirt, cupcake shaped, and is sort of corsetty at the top. (Not sure how to explain it.)

Now, I know it doesn't sound lolita at all, but here's the thing: It has these large ornate crowns sewn onto it. (They're white. Like the fancy ones I've seen on Lolita clothes)

Would the skirt work with proper lolita attire? It's a very dark denim, so you'd have to really look to tell it was denim.

I can also wear my petti on it, and it conforms to all the rules.

Maybe I can wear it with casual or something? What do you guys think? I don't have a picture of it because my camera broke.

I'm relatively new to lolita, never done cosplay or modeling or anything that gives me experience in posing. And I've found that although I love people taking pictures, I usually look...awkward. I never know what to do with my hands or feet! So I'm asking for descriptions/pictures of your favorite loli poses! My sisters and I are having a tea party on Monday to celebrate my birthday (which isn't until Thursday, but Monday is a day off, so meh) and I want to take pictures, but I want to be able to tell them how to pose.

Can anyone please explain me what this event is all about? I just saw it in the BTSSB webpage and was wondering what was involved in it-- apparently, Kaya will be participating, so this issue matters to me! 8D


Also, did anyone see Versailles' new collaboration with Alice and the Pirates? Apparently they only have one thing so far, the JSK. It's up for reservation, but maybe it'll go on sale soon, or they'll release more stuff by the same line. Who knows if they'll produce any more things with AatP. I hope they do; their last collab was quite pretty, although the JSK they previously designed was kind of similar to some other JSKs Baby has previously released. Both the new and old designs remind me a lot of the Pocket Embroidery JSK for some reason.
I like this one better, it's a bit more original and it has tiny rose buttons. :'3 It comes in three colours. I might reserve the red one. I was pretty pissed the last time they released their new Prince and Princess line-- I couldn't get my hands on a single thing. But now I have an excuse to get that JSK... upcoming concert, ahoy!

Was wondering if anyone knew the measurements for the BABY, THE STARS SHINE BRIGHT Alice dress pattern ribbon kingdom,
I found it half price but don't know if it'll fit me right ^^