(If this question belongs in comm_sales, please let me know and I'll take this down right away!) 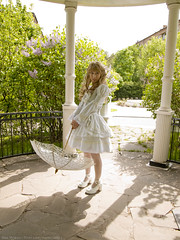 Go to http://www.PacificMediaExpo.com. Raffle entry form is on the right side of the website. Raffle ends 5/31/09.

Anyone else in the UK have this problem?

I ordered a dress from Metamorphose a while back and apparently  Parcelforce tried to deliver it yesterday but I was out. So they leave me one of those slips instead, saying that the parcel is waiting to be picked up at the local post office. I even check the tracking number on their website to be sure - according to that, it's definitely there.

So I go down to the post office this afternoon - only they can't find the package.  And they tell me it's not been delivered yet and I should come back later this evening or tomorrow.

This just strikes me as bizare - where the hell else could it be?  According to the tracking number, it was delivered to the post office at 17:51 yesterday evening. How could it have been registered there and yet not have arrived yet?  How can it not have arrived yet when I have a slip saying that someone tried to deliver it to me yesterday afternoon?  Is it just sitting in the back of a van somewhere?

I'm getting nervous - this dress cost me a lot of money. Where is it?!

Update:  Okay, I went back to the post office to see if it had been delivered later - nadda. So, I called Parcelforce, and they track and say that it MUST  have been delivered to my post office because (get this)  they have a signature for it.

SOMEONE  in that post office signed for my dress. They gave me the name, which I've got written down, and I'm going back down there tomorrow to find out what the hell is going on. At this point I can think that it's either one of two things - either someone has stolent it, or the name on the parcel doesn't match what's on my slip (either it's mispelled, or it's gone down with both my last names - I have two - as opposed to just the one that's on my slip, or it's got the other one; although  I can't think how that could have happened because I only ever either use BOTH, or the one that's on my slip... aargh!)

( Collapse )
I was wondering: If you could rename the fashion, what would you call it and why? What do you think the reactions to "Lolita" fashion would be if it was never named Lolita?

I don't think I would rename lolita anything else (and not just because I can't think of something. xP) I believe rude people will find other ways to be rude even if the name was different. After all, I'm sure most of those name-calling drunk people I hear about don't know that the fashion is called "Lolita" in the first place. When I try to explain lolita to others, the name is usually a major turn-off. Some people say mean things about it, but I think holding our heads up high anyways makes us stronger.

On the other hand, I've gotten "Dressing lolita about attracting pedos. Why else is it called Lolita?" reactions before from random non-lolitas*. They can't say that if the fashion had a different name. xP

So, what's the meaning of lolita being called lolita to you?

I'm surprised this hasn't been brought up before...

I'm a member of a site called Meez, where you can make virtual avatars to use in a virtual world. They have some lolita clothes available. A first, their 'lolita' clothes where pretty pathetic, but they've slowly improved and from what I can see on the Suggestions forum, it'll only get better. Here's the dresses available so far: