Well. I'll be flying for my first time ever. And well. My baby parasol doesn't fit in my luggage.
So umm..
Do you think I'll be able to carry it.. aboard the plane? T_T I really don't wanna be without it...

For those curious.. I'll be heading to South Carolina, near Myrtle Beach or whatever its called ^^;;
If your around the area please comment =D

Edit: I'm now here in South Carolina, and thankfully had no problem with my parasol!
I'm so glad I brought it. The sun is a killer down here. ^^
I drew a small sticker type picture for my dA journal and I knew you guys would love to see it. So here it is!

The outfit she's wearing is a slightly modified version of a JSK and blouse from Baby, The Stars Shine Bright. Incase you were wondering, my dA is http://makime.deviantart.com :D

Enjoy! Let me know what you think. :D

As many times as there are posts about this, and as many times as I've asked myself and tried to figure this out, I just can't D:D:
So I've given up, and I'm just hoping there's someone kind enough on here that will tell me exactly what it says and what I need to do to figure out the correct measurements for this item right here.


The problem I have is I calculate wrong and I don't know what why. I know that there's 2.54cm in one inch, but the measurements always come out way too small for any human being, so I figure the measurements are taken flat so I double it; but then I'm told that it's wrong. I have no idea.

So please, what are the measurements? D:

So I sent this comission out recently and I thought I'd share (it's owner is probably frolicking around in it at AX right now XD).

Technically it *is* cosplay-lolita, but I really think the pieces could be suitable for everyday wear as well (sans bunny ears, that is. XD)

( Collapse )
Generally I don't like to show works in progress, but this piece came out so well so far that I felt inclined to share it. It's part of an outfit I'm making for my boyfriend for otakon ^^

During the entire waiting time for my lucky pack I kept my fingers crossed for just about any other colour other than a black OP. As luck would have it I got the all black one. I guess I'll make the best of it. :D

Hello everyone!
I'm in Tokyo right now because my team made it into the finalists of this year's Blythe Beauty Contest. The show was held yesterday and went amazing. I got to meet Novala Takemoto and Kumiko Uehara as they were in the jury! They loved our doll! Furthermore I scored Yukinonamidahime for her retail price (I refuuused to pay what she fetches on ebay) and got her box signed! ^.^ 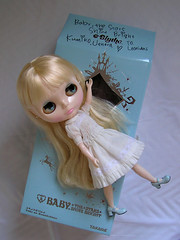 .. in a SMALL group order from either or both of
annahousefashion.com
or
http://www.rakuten.co.jp/bodyline/
i just dont want to pay 30$ shipping. for only a few things.
anyone interested?
I was about to purchase some angelic pretty skirts. I was all ready to order when I clicked the add to cart button.
But, to my horror it gave me a message telling me they were all sold out. Dx
The question here is, if AP ever re-stocks once it's sold out, or am I out of luck here?
They had them in other colours, but I only wanted pink and it seems to be the fastest selling colour.
I hope they come back into stock because my money will be burning a hole in my pocket, until it happens.

Just got back from the Heart E sale in Osaka... and I got this purse! (Heart E x Sanrio collaboration.. hence the Hello Kitty bow on the strap)

It was already half off because it was "damaged" (IOW had a tiny black mark on the bottom that I didn't even notice until the sales girl pointed it out to me), and then another 30% off cos everything int he store was on sale! Hooray! Hope tomorrow fares just as well when I manage to hit the other lolita stores in Osaka! Wish me luck! I'll post more as I aquire...! ::thumbs up::

[EDIT] oh, and just to make this post a little more fulfilling, here are some print club photos of me and my friend

maetel (who is also named Michelle, ironically) having a lolita day out in Kobe! Enjoyyy
( Collapse )

Yeah, yeah, I know. I just thought I should post because I've gotten something that I don't think anyone else got.
( Collapse )

I live in the UK and my lucky pack's been held in customs since the 27th, and I only found out today by using the tracking service that the reason is because I've been charged with customs, and they're waiting for me to pay it (yeah thanks for telling me??). I'll phone them on monday about it, because they're closed now, but...

I was wondering if this has happened to anyone else and how much you've gotten charged? I dont know if they're going to charge me the 12%/17.5% out of £70, how much I paid for it, or the actual estimated value of £180... ? Cause that's quite a big difference. I could be paying £8 or I could be paying up to £31! depending on what percentage they use and which value they use. T_T


Go check out the other colours

Ok, I bought two lucky packs and I think I'm getting charged customs fees. (I'm in the UK btw)

Can anyone tell me,
1) When you buy two lucky packs, does Meta send them separately or as one package?

2) Do they mark them as gifts? answered

3) Has anyone ever had their packs opened and been charged according to the price on the tags?

4) How am I supposed to pay the fees when I've not even been told by them that I have to yet and I only know because of the online tracking thingymabobble? Are they going to tell me? If so, how do they do this?


Thanks so much for helping... I've pretty much got everything answered now ^___^;; but it's stilll so worrying...

Hi! Does anyone have a clearer/higher res version of this image? I'm specifically looking for images of the ties.

I'd be really grateful if someone could post one or if you could point me in the right direction.

I had an odd dream last night
( Collapse )
also, a couple weeks ago [not too long ago, but I'm not sure of the exact date @___@;;] I ordered a shirt from Candy Violet [the Polka Dots one ;DD] and I've yet to recieve it.. does anyone know about when their stuff usually comes in? [I picked the cheapest shipping one, but I have no idea how long anything takes to ship annymore D;]

Thank You lovely ladies for looking and for your help! ;]

( Collapse )
EDIT: Found, thank you! (unless there was more in the series than the jsk, op, skirt and bag ^_^)

Hello there. I joined livejournal today just to talk to you lovely ladies. This is my first ever post on livejournal, so horray.

I've been lurking about lolita communities and forums for awhile now, but as I live well below the poverty line I've not done anything active  about my interest in the fashion. Right now though, I'm trying to build my first outfit and I would appreciate some help. ( Collapse )

Did the Punkuma camo series come out with a bow or any other type of headdress?

I put together this "cybergoth inspired" outfit, and it'd probably look better with a hair thing from the Punkuma series.

Yes, I do remember that there is a cowboy hat. :p

I came across this article regarding a Japan Expo in Paris, France on 8th July. From what I understand, Laforet Harajuku as well as a host of other brands will have booths during the exhibition where you can buy items. Also, there's some sort of music? autograph? event featuring various Jrock/Jpop stars such as Yoshiki, GARI etc.

So....ummm... anyone willing to do some Fairywish shopping service in France for me? *hopeful eyes*
Collapse