I forgot to post them up last time so for the loli-ists here are your rainboots of cuteness by Swimmer:

Okay, well any time really is a time to bake! Here're some pictures of baked goods I've made with recipes! I've always though of madeleines as particularly lolita since they're adorably cute, french tea cakes! As for the cookies and cakes, though not necessarily Lolita in design, the royal icing and fondant are easily adapted to anything you can come up with! **IMAGE HEAVY**

New pictures for our late Spring and Summer items. These pictures does not follow the full tradition of EGL, especially the Wa-loli top, the top is worn without the skirt, by itself it is not a one piece dress. The reason being these will also be used for for a different audience later. These shots were directed by a fashion photographer, who markets to editorial magazines. These outfits are inspired by EGL and has it roots in EGL even they are modified to draw the attention from crowds that has never heard of EGL before.

NYC TODAY! We will be meeting today at 1pm at 85th and 5th/Central Park East. Don't forget!

I think I may have missed the boat.  So to speak.

I think I'm too old for Lolita.

I'm almost twenty four.  I have a three and a half year old daughter.  I got pregnant with her when I was nineteen... The years passed, I concentrated on being a mother, my sense of identity and fashion fell to the side.  I realize now that I still wear Hello Kitty t-shirts and knee high stripped socks (for example), same stuff I wore when I was nineteen, appropriate then but not now.

I've found Lolita fashion now.  I adore it.  All I would need for a lolita wardrobe would be the petticoats and skirts.


I guess my question is...   Can someone who dresses in Lolita fashion be a mother?   I have it in my head for some reason that I have to dress and act my age now, cause I'm a mother.


(and oh my I hope this post is alright for this community.)

Cakes have been a really popular thing lately..and ive seen a lot of those cake headresses, i was link hopping and i found this site and it has lots of them XD
Cake hats 1
cake hats2
they have fake cakes and clothes and accessories too.
Click the links on the side. Thought you guys might be interested in looking at it X]

Apparently, for my birthday I'm getting a new fan+friend dress. :] I don't know which one, but I know it's one of these two, and just in case I really need some help coordinating things with them. ;o;

Has anyone here seen cherry recipe print from Baby in person? (I don't think that's the official name, but it's this one.) On the red version, is the print white or pink?

This would be the first time I ordered a brand name outfit from the website rather than just random cheap pieces, so I'm a bit nervous. Please give me some inputs on whether that's a good outfit or not ^_^

Baby is that... crushed velvet?!?! D: At least your other velvety piece had nice details to it!

Last year I know there were many attempts at organising a big J-fashion/Lolita meetup in London.
Some ended up as gatherings.
Most failed.

But this Summer, goddamnit I'm going to try.
The UK Jrock scene is... well spread, lets say. Even in holiday-time there is still the "No money for train fare D:" issue. Hence the early organisation, so hopefully people can get their shit sorted if they really want to go.

- I am thinking a Saturday. Either Saturday 28th July OR Saturday 4th August.
- I am thinking a picnic in a nice park (Hyde park?) and/or a shopping trip.
- I am thinking not a strict dress code, though obviously it would be nice. But I don't want people going "I don't have any cool clothes! People will hate me!" because that is bollocks, and if anybody looks down on anyone else for not being "cool" enough I will personally tell them to GTFO.
- Obviously, any other ideas are welcome.

But what I really want to know is WHO IS INTERESTED IN ATTENDING?
(And if you would bring friends then please give a general number)


P.S. If you are in my cru then you just know I'm going to beg you to come anyway because I haven't seen you in too long and I'm getting crack withdrawals.

I don't think this has been discussed (or if so, in a while anyway . . . ) I know people ask why others have gotten into lolita and such, and there's always debates about that. But I want to know:

Why did you choose the certain lolita that you wear?

Sorry, phrased weirdly. I mean, if you like gothic, why did you choose to be a gothic lolita. Or if you like sweet, why sweet? Is it physical reasons? That you think it looks best on you because of your face, figure, etc? Or other reasons?

I'm just a curious person . . . although curiosity got Alice in trouble, I guess I need a crazy dream to learn. XP
I posted here in March looking for advice and my friends very kindly came and did a photoshoot for me last weekend! One of my friend is really good at photography so they came out really well!

Hello there darlings,
Well, I finally got around to watching the third Pirates of the Caribbean movie last night, and it put me in mind for a pirate loli outfit! I was reminded of some of the AaTP and Milky Ange pirate outfits I had lusted after, and now I'm thinking of getting one as my goal for this summer's waitressing job. I seemed to fall in love with the big hats they wore, though, and now I'm envisioning a pirate loli with a huge plumed hat! What do you all think?
( Collapse )

I'm not sure how many knows about PHAIDON's newest realase, which is lolita -themed. I actually did preorder it already in February but it was realased just in May, so not too long ago. Anyway, I got it today (finally!!) and now I have scanned 10 pages (I hate scanning, so that's why so little) and I have wrote up the text which introduces lolita style in the book.
It's actually interesting to read, since it tells about lolita style a bit differently than the texts we (okey at least me) have used to.

If you wanna see my scans of this, please take a look to my own homepage, over here. You'll find them from the "BTW" section. Hope I didn't made this too complicated.

I'm interested of your opnions about that text also :3

Adventures of loli cat and her owner... 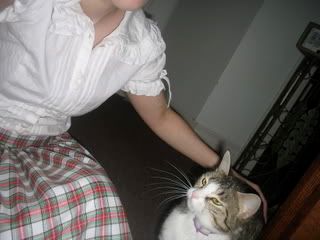 
This summer I'm planning on remodeling my room. Because I hate it right now. But first things first, I need to re-paint it!


So, what colors would you suggest? I've been thinking of pastel colors, but I'd love any suggestion. Once it's not black. Or white. ORRR yellow.

Also, I've very hesitant about putting up any type of wallpaper or uh, those paper border-things [the last one I had totally messed up the top of my walls] but aren't there those fancy brushes that have the patterns already on them? Would you suggest something like that?


Any help would be greatly appreciated. Thank you!

Is 17 inches pushing it as far as short length is concerned.
I commissioned a skirt from a friend, and it came back shorter then expected.
they had a no return policy or exchange..
it's 17 inches and I was thinking maybe wearing white tights,
since its a white skirt (not completely but partially)..
btw my height is 5'4
Just a little blurb for today.
Thanks:)

Perhaps this is just me and stems from my many, many years of poor self-body image, but...
I have noticed that many girls here call themselves "fatty-chan"s. I understand that it's not intended to be demeaning, but I just can't help but feel bad every time I see someone call herself that. In real life, I think it's pretty mean to say someone is a fatty, even if that someone is themself. It's as if she doesn't think she's the same (or possibly even as good) as other lolis!

I can just imagine a girl to come on here who thinks her bodiy is perfectly fine--until she see a girl smaller than herself who deems herself as a fatty.

Do girls feel they are expected to call themselves fatties because they don't fit in to all of the clothes that come from a country of (generally) smaller people?

Perhaps I'm being a bit over-sensitive... and I don't know if I'm making too much sense...

Discuss! Even if you disagree with me, I'd like to hear your views on the subject.

( Collapse )
We can't possibly wear lolita ALL of the time, right? So...


What do you wear when you're not wearing lolita? Describe! Post pictures!