This week's TBT is December 2004! Since this is nearly 10 years ago, most of the photos shared don't work, so there aren't any outfit shots (besides this one!) but there was a few instances of Lolita/Jfashion popping up in the mainstream that I thought was neat. 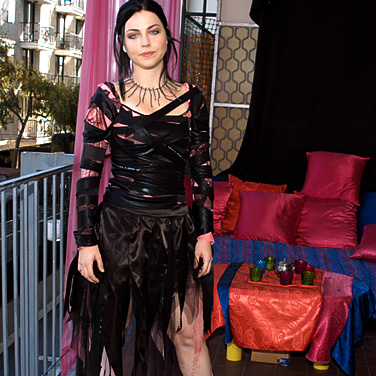 Amy Lee designed this questionable dress and had h.Naoto create it for her, and in one episode of America's Next Top Model they went to Japan and featured some Jfashions, including Lolita. They visited both Milk and Meta and put together some cringe-worthy outfits that were suppose to be their attempts at "Baby Doll Lolita" or something. You can see the segment starting here and continuing here. I love getting to see what the stores looked like back then, but ouch, it's very painful to see these girls so apathetically put together some of the ugliest outfits I've ever seen.

One of my favorite posters on EGL from this era is this girl, who made some really cute clothes, a lot of which were reconstructions. People were also weirdly obsessed with finding dresses with Lenore collars, and a lot of dubious "Western Lolita" shops at the time pretty much always had a Lenore dress in their "EGL" sections. These weird bellbottom leg warmers were also really popular at the time for completely mysterious reasons.

A lot of the same types of questions you still see today were first being discussed back then! Including "How old is too old for Lolita?", "How much is too much?" and "How important are brands?". A lot of the answers are the same ones you'll see now, but I think people back then were much more open about being close-minded about some of these things! You're more likely to see someone bluntly say "X is just too old for Lolita" or "You just shouldn't wear Lolita if you are X" than you would see people saying now! This post is also really ridiculous sounding now, because it's 2004 and they're claiming to have been interested in Lolita (and yet they call it "EGL!") for the last seven years. As silly as this post looks, this sort of claim wasn't really that uncommon back then, and no one really ever called anyone out on it xD You would often see people make posts like "I just found this community and learned the name "EGL" but I've been wearing the style for the last decade!". Everyone in 2004 was such an expert xD

Last but not least is this pretty hilarious sales post. This girl is selling 2 brand items, and she gets 37 comments! It doesn't even look like she ends up selling anything? Old sales posts were suuuuch a mess. Everyone wanted to tell you how much they wanted your clothes, but no one actually had any interest in buying it!

I'm probably going to put this series on hiatus for the next month or so because I really should be working on some other stuff! So this will be the last EGL TBT for a while, anyone else is welcome to pick the series back up though ;D