Early 2005 on EGL was a really annoying time. Everyone complained about Gwen Stefani, "rorita" was used unironically, the bibles were regarded as actual bibles, and everyone thought their ita years were long behind them so everyone thought they were the sole shining light of the ~true rorita~ outside of Japan.

Here's a post asking why Western Lolitas wear dreadfalls but Japanese Lolitas don't. It has some pretty cranky responses that were very typical of the time:

"You can't blanket say Dreads are not loli
that's blind snobbery at best.
How do you expect fashion to evolve if you put such hard rules on things ?"

I've pointed this out in old posts before, but back then a lot of people had it in their head that if Lolita fashion didn't openly embrace Western goth trends it was doomed to go stagnant and fail. During that time it seemed like a reasonable fear, but in retrospect it is hilarious. Lolita is it's own fashion and was destined to evolve on it's own and cultivate it's own trends. What Lolita absolutely didn't need was the help of some teenagers on an English speaking forum to force random trends on the fashion in an attempt to make it "better". 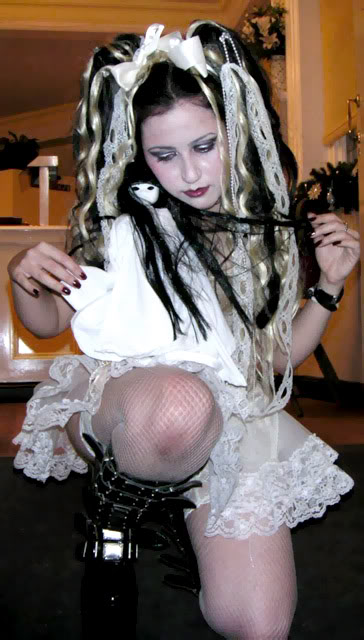 I didn't know if I wanted to include this, because it was like the biggest drama on EGL at the time, but in retrospect I think it's a perfect example of the first few years of EGL meeting the beginnings of "Modern" EGL. In 2003, I don't think these outfits would have been anything out of the ordinary on EGL, but by 2005, people were becomming aware of "authentic" Lolita and finally trying to weed out the old regular Goth roots and just butting heads. This comment by one of the girls in the picture is interesting because this band was apparently accepted into a Tokyo Dark Castle USA gig and uses that as a reason why their clothes are perfectly Lolita. I just think it's a funny example of how people on the comm back in the day equated everything to happen in the Japanese alt culture with Lolita.

To me, one of the iconic "old debates" is the communities hesitation about accepting polkadots, here's a post asking if polkadots are OK in Lolita. No one outright says no, but there's a lot of "well... they have to be small..."

What EGL was having absolutely none of though was leopard print! The first EGL TBT I did featured Meta's 2008 leopard print release and most people weren't even ready for it then. In 05, people were pretty offended by it's mere existence.

There are sooo many posts asking people to clarify very basic things about Lolita, people seem especially confused by the idea of different styles.

I like this old post asking what sort of colors are considered "unusual" in the Lolita fashion. Most people are reasonable and think pretty much any color could work, but some are less sure. I mostly like that the OP's list of "accepted" colors was "black, light pink, white, and red", which really wasn't far off the mark from pretty much the only colors you saw on EGL back then, despite what other brands released.

I found this post interesting because the term "Guro Lolita" doesn't seem to be a known thing, most people are calling it "Broken Lolis". Here's a post from a few days prior, a survey asking what your favorite style is, and it has a few "GoriLoli" answers.

This post asking to clarify the different styles is interesting because it's needed  at all, as well as the fact that the first commenter gets "Country Lolita" and "Classic Lolita" confused. I've noticed that in the first couple years on EGL "Country Lolita" was sometimes the blanket term for everything that wasn't Gothic Lolita.

Remember when people called Decora "Fruits"? I sometimes have to stop myself from calling it that xD

I'll leave with this clusterfuck of a post about how Lolita doesn't suit some people and we should tell them that instead of just complimenting them, and if Lolita doesn't suit them they should just find another fashion to wear, or something along those lines. Not everyone agrees, but most do. I mostly just find this interesting because I cannot imagine someone saying something like this in the community now, especially now that I would think that many people would consider Lolita more of a subculture now. The idea that idk because you're too tall for Lolita you should go join the rave scene or something is just so bizarre.

What were you doing in early 2005? In early 2005 I was still lurking around EGL (I hadn't yet abandoned it for Den of Angels and BJDs!), assuming I would never ever own any ~real~ Lolita clothes, assembling the best I could manage out of Hot Topic clothes and Goodwill finds.