Today's TBT is all about December 2006. There's not a ton of stuff going on in this month, but there was a lot of really cute photo shoots and meetups that still had working pictures!

This was like riiiight before the Deco/Hime/OTT boom and things were still firmly as what we would recognize now as Old School Lolita, but brands were just starting to dip their toes into the more out-there styles. You can see this post where people are all up-in-arms about a BtSSB dress with an organza overlay (this is the line they were all so shocked over), I love this post because this dress is so typical Lolita but people back then were talking about how it's out of the norm for Lolita and implying that it's maybe not supposed to be Lolita. 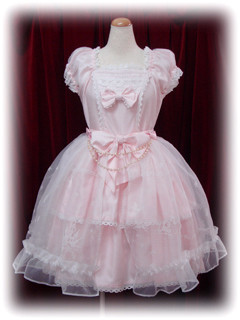 Shockingly over the top for it's time, apparently.

Does anyone remember Lolita Snap? The old Lolita outfit snap website? Here's a post about people concerned that it's gone for good!

Or what about this skirt exchange that people did? I remember this when it was new and wishing that I could sew a skirt! I think it's such a cute idea for an exchange, but maybe it's not as useful and fun now as it might have been back then.

As I mentioned in previous TBTs for around this time, EGL was pretty obsessed with Novala. This month had a couple different translations of some Novala works: "Rules on the Lolita" and "Let's Learn the Maiden's Way".

There were a few really adorable pieces of art by one particular member this month, this "They see me rollin" picture that I've seen lurking around and never knew the source of, and this goofy Animal Crossing one. I think this would be for the first AC, and I just think it's funny that she has to explain how it's a Lolita game and there's some talk about how to make your character more Lolita. Now it's easy in AC, but it used to be much more of a challenge to make a Lolita character!

For some reason, everyone on EGL was freaking out about this particular H&M dress. I remember seeing sooo many Lolita photoshoots with this dress and the similar one in dark grey.

Everyone was either really mad, or really supportive, of this fetish event that was hosting a Lolita fashion show and included a pretty creepy description of Lolita fashion. I am honestly surprised that so many people were so nonchalant about it, because the tagline for the show was creepy and weird "'Playful and amazing, little girls, are big girls, are little girs, are... all cute as Hell. Naughty designs presented by..."

As mentioned, there wasn't a lot happening this month, but there were tons of meetup and outfit photos! Check out this totally cute old school black and white outfit. This amazing group from Oregon, does anyone else remember when the Oregon lolis were like the lolis to be jealous of? I remember they always had such large (for the time!) meetups at such fun places. And everyone wore brand! Check out all the ringlet wigs at this ice skating meetup! This particular photoshoot is amazing and so perfectly iconic of the era! These dresses are all such classic Old School now!

Here's a picture of someone's collection of Lolita points cards from their trip to Japan, and last but definitely not least, check out the pictures from this BtSSB group order, my heart skipped a beat looking at these photos!