We're going to take another look back at 2007 with this week's Throwback Thursday: October 2007. This is only the month directly after the last 2007 TBT I did, but there were some things in it that were just too good to pass up! As I pointed out in the last post about 2007, EGL was kind of drama crazy in 2007 and there was just generally a constant sort of background noise of just everyone bitching at everyone else.

Baby's Trick or Treat series had just come out, I believe this may have been the first "seasonal" Lolita print, and it got people pretty confused if it was something you were supposed to wear all year round. Looking back at the print, it's so tame and barely even noticeable that it's supposed to be a Halloween print, it's a wonder why it was ever an issue at all.

2007 was right before the replica craze, it's not that there weren't replicas at this point, they were just viewed a lot differently. Here's one that I actually completely forgot about until now, one of the most infamous early replicas was this really ugly Btssb "brandwhore" print knockoff that was a really weird cut-and-paste job of the name. It's hard to make out in these photos, but it didn't just say "Baby the Stars Shine Bright" over and over again like the original, but it was a weird hodge-podge jumble of the name and said things like "Shine Bright. Baby. Baby Stars." Not to mention just how generally ugly the overall construction of the skirt was. Does anyone else remember the UK shop called "Angel Pretty" that sold most of these? 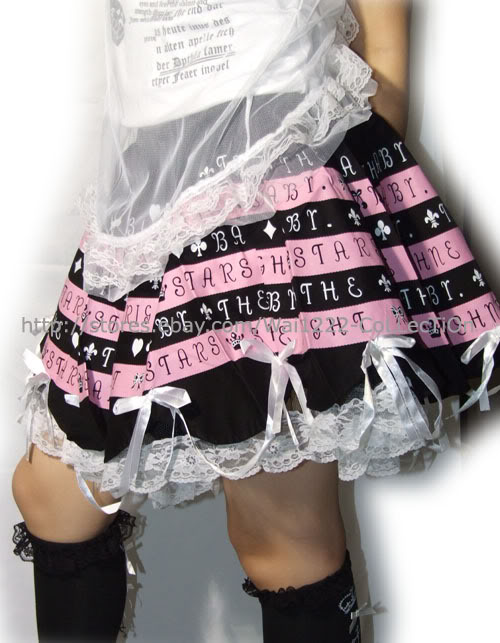 It's weird to look back on this post and see how differently people felt about replicas, and even what they referred to them as. Back in the early 2000's the word "Replica" was used a lot to mean that some seamstress sewed them a plain colored dress that looked, more or less, similar to a brand one, it was like saying "No, this isn't brand, but the look is very authentic because it was made in burando's image". Up until very recently what we would now call replicas (non-brand dresses masquerading as brand by using their official prints and names) were simply called knockoffs. Somewhere along the line people dredged replica up and started using that word for knockoffs, and I think that fact is very interesting.

Back to the topic of legit brands, one of the reasons I chose this month was for this absolutely hilarious post by someone claiming to have absolutely reliable sources that Metamorphose was totally going out of business soon. I find it funny how blasé everyone seemed to be about this, if not downright mocking! I feel like if one of the major brands went out of business today it would come as a much bigger shock. Looking at this post it's also bizarre to note that just 2 years before this Meta was basically all EGL talked about, and it's obvious just how influential Meta was in the forming of the early English speaking Lolita communities since Meta was the only Japanese Lolita site that had an English version and it had frequent updates about substyles and how to be a Lolita. It seems like as soon as Kamikaze Girls came out in English EGL was quick to toss Meta aside and focus on Baby! But EGL does this often it seems xD In 2010 no one cared about Baby and everyone was talking about how their designs were boring and they needed to stop trying to steal Angelic Pretty's style. In 2007 AP had only just opened an English site but still didn't ship overseas. I believe this was right before AP's first appearance in the states at PMX?

In 2007, printed pieces were still relatively new and there were a few posts in this month that discussed them. There's this one asking why strawberries were the only fruit that ever seemed to be on Lolita prints (with bonus of this one girl's very old mystery BtSSB dress, can anyone date it? I've never seen it before and it was apparently very old in 2007!), here's a neat post asking what people's favorite "themes and symbols" were, and one asking what sort of unusual (for the time!) themes people would like to see on dresses, I think it's worth noting that deer is mentioned because now deers are all over everything!

I also really like this post asking what people's most wanted item was! It's neat to compare what sort of things people were coveting in 2007 vs now! I feel like nowadays everything is very accessible so the things people tend to want the most are things that are things that are rare and expensive (simply because if it's not, it's very easy to pick up just about anywhere!), while everyone's choice back then was just very simple dresses or random recent prints that were hard to get simply because they were brand. I think that this thread is particularly neat too, about how "omg why does everyone all the sudden want Iron Gate?!" and cites a specific photoshoot (or maybe this one) for the now infamous print.

Here's a post I thought was neat about Closet Child's prices being absolutely crazy. It's like EGL's first experience with the concept that some pieces are way more sought after than others and some people are willing to spend a lot to get them. As noted above, this was like riiiight before the Iron Gate trend and, at least personally, I remember that second hand prices almost never went above retail price.

On the topic of "Posts I cannot imagine people making to EGL today", late 2007 has quite a few! Check out this post advertising a childfree Lolita community, this post asking what sort of extreme plastic surgery would make the perfect Lolita, this post making fun of something on DA for not being Lolita enough, and the post mentioned in the cut text that might possibly be the dumbest post I have ever seen on EGL but here is a post about people getting very excited for cute tampon boxes, so much so that they are asking people to open up a shopping service for them.

And last but certainly not least, here's a really adorable pumpkin someone carved and some absolutely perfect little Lolita sculptures!

Do any of you specifically remember any of these things? I would love some input about how you felt about these things at the time! I know my own posts about this are obviously skewed by my own perception of the comm at the time!