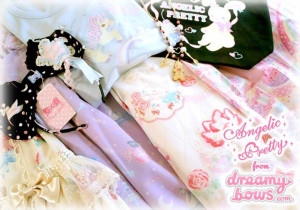 "History was made in the Lolita United Kingdom scene as at 1:10pm 22nd of July "Dreamy Bows" officially announces they will now be a Stockist for Angelic pretty. Making this the first brand to officially set up business in the United Kingdom.
The online shop is yet to launch but they're already impressive stock will be available at this weekend's approaching Hyper Japan.
Their webshop hinted to open later in August.
The official announcement can be read on their facebook page,
Though with this news and the up coming "Frock on" set to be the world's largest Lolita convention, It's safe to say the United kingdom Lolita Community is having a very good year."
And you can read their announcement here.
https://www.facebook.com/DreamyBows
I hope you're as excited about this as I am! I'm very curious to see what their prices will be like.
As well as what their postage fees will look like.
Either way August is going to be a very exciting month!
Subscribe