I was working 2-10.30pm, 6 days a week as a part-timer at Daiso for incredibly low wages to buy a PS3 to play Final Fantasy XIII when I found Lolita (or it found me). I used my first salary to buy a dress from Black Alice, a shop that sold brand-new branded loli instead. Three years and 6 jobs later I still don’t have a PS3… but I do have some very beautiful clothes. DX No regrets! I still did play FFXIII and other games on my friend’s PS3. SG is a country in eternal summer, meaning normal humans would sweat, so most of my stuff has to be washed after wearing. ): Since I'm still a poor student, I can't afford to dryclean all my clothes, and all of Baby and AatP's stuff says 'dry-clean only' on their tags. This isn't true, so I'm just going to mention which dresses I have found to be handwashable, and which ones run.

My beautiful banner was done by the amazingly talented

zhenteng. Please do drop by her artblog here: www.thezenthing.blogspot.com to see the process of how she draws stuff and some very nice classic coords! She is also the co-author of a well-drawn and well thought out Lolita webcomic, and though it has been discontinued, you can read some 20+ strips over here: (please do, it is excellent. and the guro-lolita in my banner is a character from the series).

On to the clothes!

I don't follow a specific style except that I have to like everything that I own. Yup. 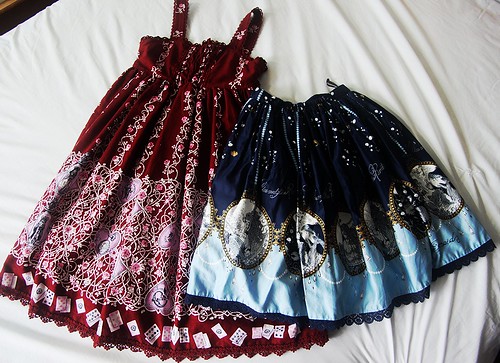 This is my very first lolita dress, Alice Beardsley in red by AatP. It's even more beautiful in real life and I never meant to buy it because it was so expensive, but the shopgirl asked me if I wanted to try it on, and I thought oh why not... ;________;
And Melty Mermaid Princess in navy, also by AatP. Both are handwashable in cold water. =) 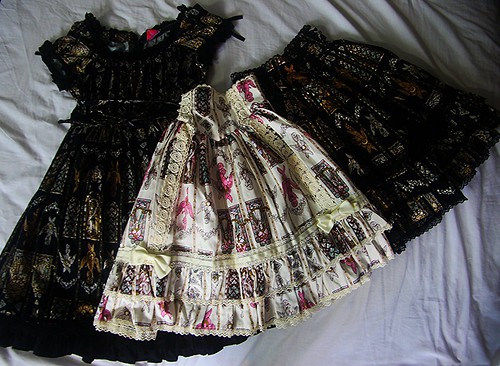 Koitsukihime stained glass angels~ I love this print so much! I'm hunting down the jsks, but for now I just purchased the white AatP jsk from pandasaurus and am waiting for it to arrive. =X The black print runs in water so it can only be dry-cleaned.
A friend has told me the white is okay for washing. 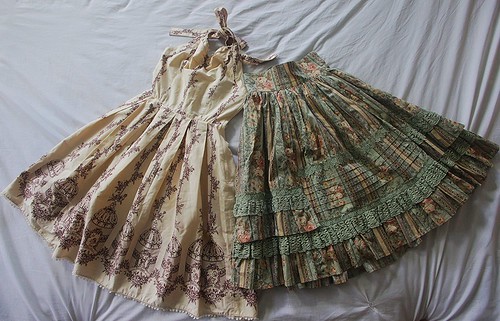 Inowa's Rose Basket Angel JSK, and a floral skirt. =D The JSK is a wishlist item so I just don't dare to try washing it! 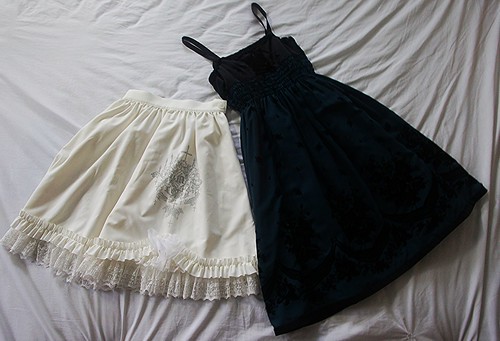 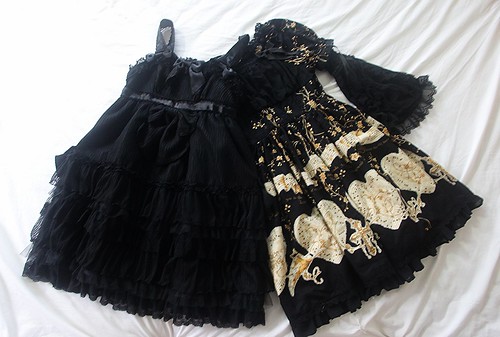 BtssB's Doll Heroine and Hymn OP (dryclean only) I can't actually fit into the Hymn OP. At least, I can put it on and zip it up, but after an hour, I am in severe pain because the waist part sits on the end of my ribcage and it really does hurt. I'm telling myself I'll be able to wear it comfortably.. one day. 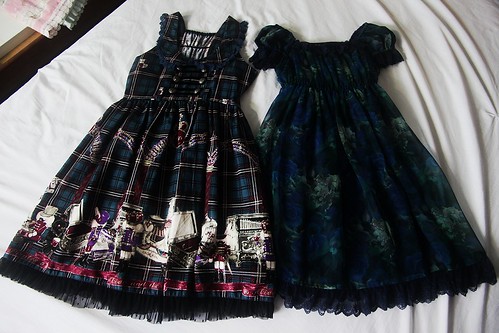 AatP's Drosselmeyer's Toy Box Clara JSK and Moitie's Blue Rose Dress (I was lazy to put the belt and ribbon on. Clara JSK is handwashable)
I bought the Drosselmeyer SK thinking it would satisfy me, but eventually I realised that only the Clara JSK would make me happy. =D It's soooo beautiful! 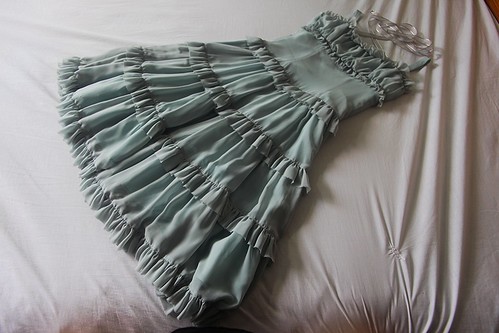 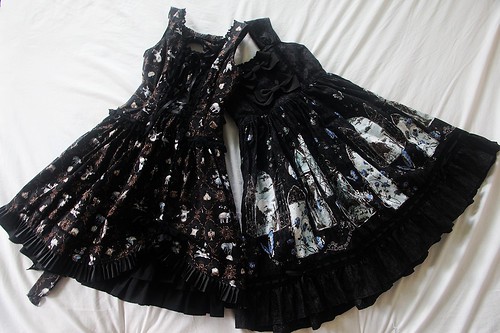 AatP's Circus Print (secret wishlist dress!) and Midsummer Night's Dream (handwash). I had the JSK I, but decided to get the JSK II instead because it's more fancy. Midsummer came out right around the time I was studying A Midsummer Night's Dream in lit class, but also when I'd just purchased Vampire Requiem and was plumb broke. I figured it would come cheaper second hand but was woefully disappointed. Saved up and chased it down second-hand two years later. n___n
Circus is another Breathing Difficulty dress. I thought I was slim till I found lolita. >__> It has absolutely no shirring and no give.. but it looks too gorgeous to give up. 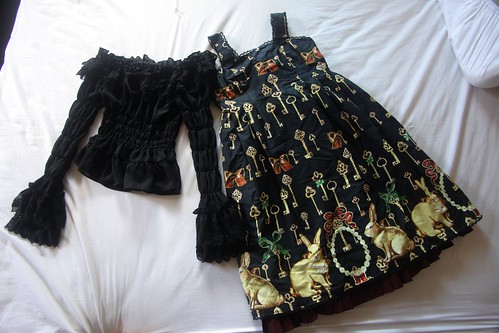 Millefleurs Georgette Shirring  (handwash) and Baroque's Missing Letter Keys and Rabbit JSK
I've only worn the blouse once with the koitsukihime skirt in black ecause it's such an event item. A friend of mine has the same blouse in white, and it looks even more lovely, but I bought the black for various reasons, including transparency. 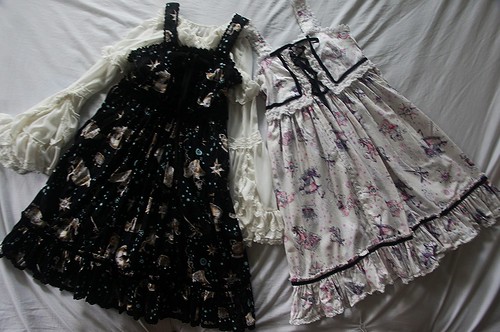 BtssB's Trick or Treat JSK in pink(handwash).. I wear it with that belt. =D and Metamorphose's Mini Wedding Dress (shantung) and AP's Fruit Parlour JSK in Mint (handwash)

Victorian Maiden's Fairy Doll JSK in Rose. I sold it before and regretted it! So I bought it again...Handwashable and so wearable!

MMM's Orchestral Print. The velvet means it's very unsuitable for wearing in this country! I'm keeping it for my models when I do photoshoots and will probably let go of it when I'm done because it's so unwearable. T__T This was a wishlist item when I first saw it, and I went nuts when I found it on auction. =D Borrowed money from a friend to get it and now it's mine! 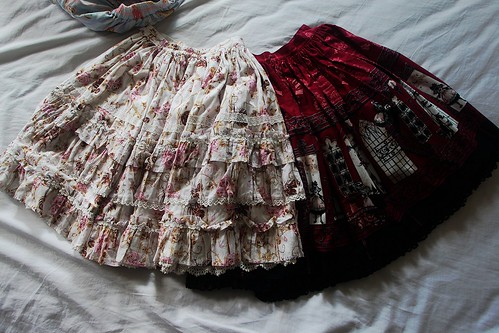 AatP's Rose Jail SK and Alice and the Clocktower SK (handwash) I'm still looking out for Clocktower in sax and white. 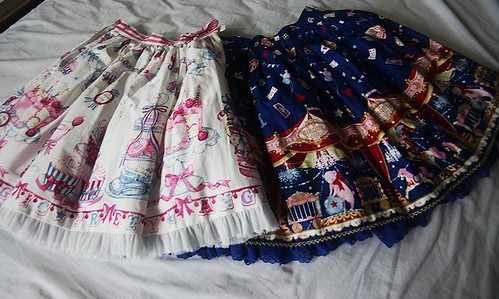 Lief's Gardenberries and Jane Marple's Angel at my Table SK.
I've obtained several items from Lief, but Gardenberries was the only keeper. =D The rest were beautiful but impractical, and I hadn't gotten around to keeping items for photoshoots only, so. D: 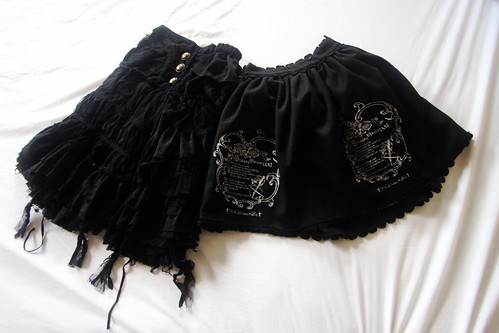 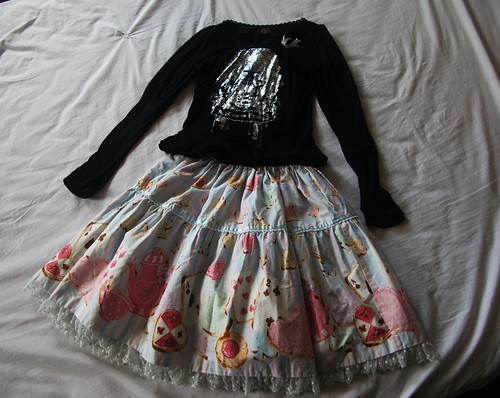 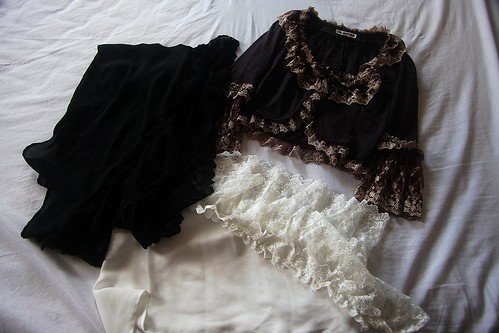 Miscellaneous Boleros and scarves.. Innocent World and handwashable!
I've a short sleeved cream one, but it's hanging outside to dry right now.

Not Quite Lolita
These are quite a few items I don't wear in a lolita manner because they're too short, not poofy enough or I just like them that way. 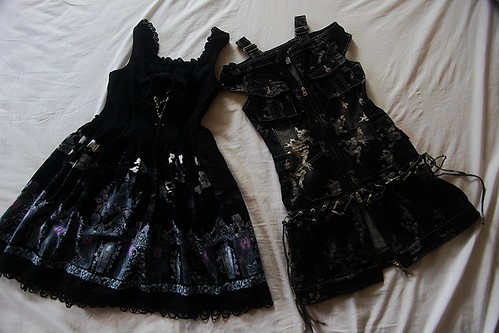 AatP's Vampire Requiem JSK, my second dress and first wishlist item! It's really great, I wear it out anywhere and everywhere, and it has been washed zillions of times but the colour never fades. I know because I don't wash the bow on the front, but the fabric is still the same colour. =D 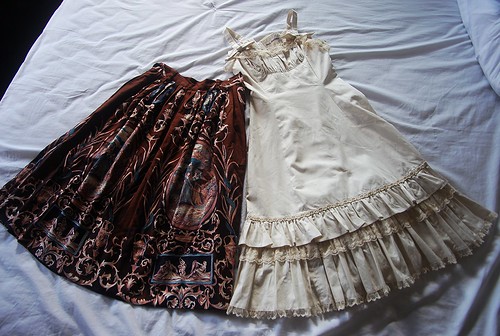 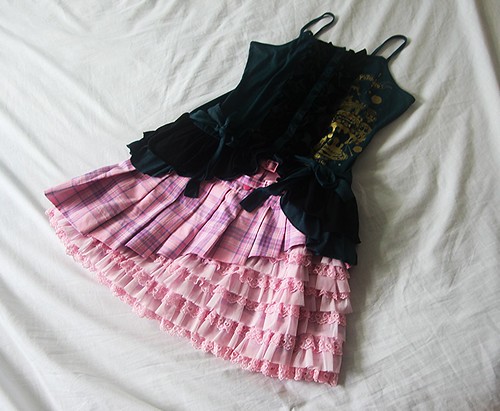 Putumayo top and AP's macaron tartan riders SK (both handwash). I missed the JSK in mint when it came out and totally regret not getting it. u__u 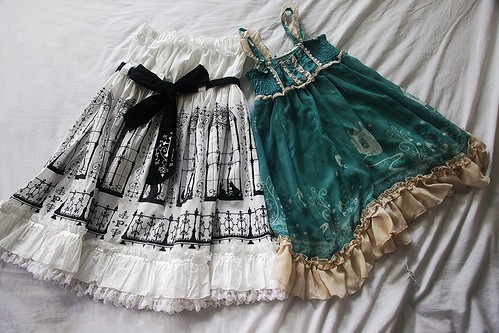 H.naoto JSK (buttons can be done on either side. =D) 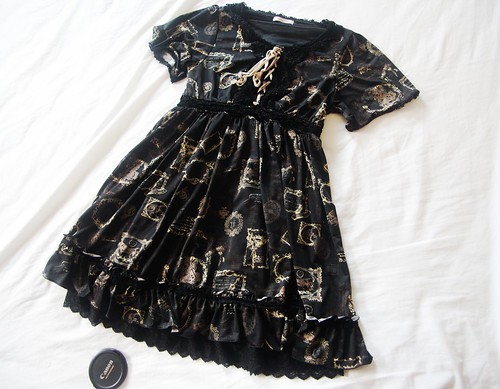 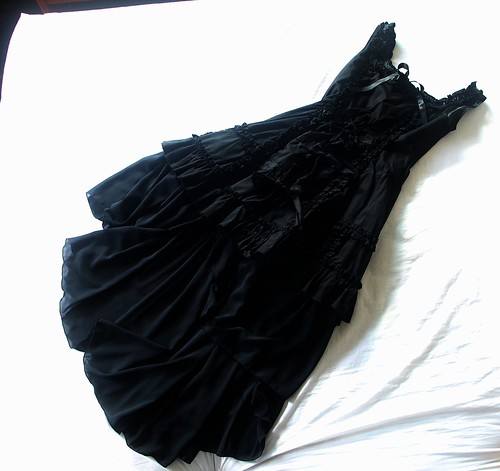 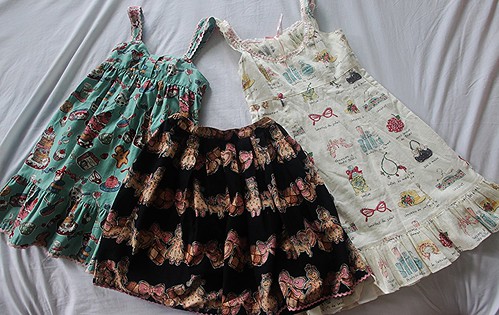 ETC stuffs. I bought the ivory dress after seeing the pink version on someone's wardrobe post. Immediate. Want.
and Get.  ^^" 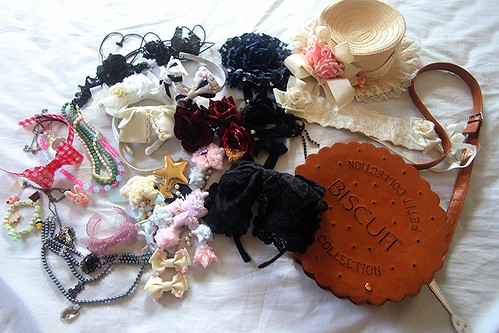 Accessories.. Nothing too much of note except my jade beads and Suppurate System rose crown. Oh, and my Beauty and the Rose Promise necklace (the corset SK in red is on its way to me!)

tights.. I've a ton of socks but I'm not going to post them up because most of them are duplicates I got in case I spoilt any.

AatP's Cross and Crown Sandals! I saw them on a girl online and had to have them. *__* Never having bought brand shoes before I didn't know what size I was, so I got L and LL. I turned out to be LL and managed to sell the L to a very sweet buyer. =D Happy story!

Since I'm posting, I'll just take the chance to pimp my shared blog with a friend, and tumblr. I talk about lolita from time to time, and also various other things so do drop by. =)

and that's about it! Thanks for reading! <