In the past few years I've gotten the chance to vend my crafts/accessories in the artist alley at conventions 4 times, and the last time I did so I was thinking that it's something I'd like to do on a somewhat more frequent basis.

But I'm a bit curious how it's gone for other Lolis! I know there are several people on here who frequently sell lolita-related crafts and accessories and anime cons, and I have a few questions, mostly just out of curiosity and to compare notes, and to just have some discussion about selling Lolita stuff at anime conventions!

If you don't have an answer for one of these, feel free to skip! Or just neglect them altogether and tell me about your artist alley experiences!

How often do you sell in the artist alley?
What kinds of things do you sell (if you have a shop to link to, feel free to do so!)?
Do you cater to a specific style of Lolita?
Do you make back the cost of your table? Do you make back the cost of the whole trip?
About how far do you travel to sell at cons?
What are the cons you sell at like?
What kinds of items, in what price ranges, do you feel sell the best?
What about which items and price ranges do you feel don't sell so well?
What one sells the best for you?
What just does not sell?
Do you notice one style sells better than the other?
Do you have any sort of special display? Do you think it helps with sales?
Do non-Lolitas pay much attention to your table?
What kind of person do you think frequents your table most?
Anything else?

I sell about an even split of more Victorian style Classic/Gothic-in-bronze and sparkly pastel Fairy Kei/Sweet Lolita inspired stuff, and I think they both do pretty well, but the more Classic stuff tends to do better because I think it just has a wider audience. Despite the fact that I don't see it as such, I've had many people say that they liked my Steampunk jewelry XD, so I guess that's good.

As for prices, I try to have a wide range of prices, I sell bonnets and hats as well, so they are definitely on the upper range of price, at about $100+ a pop, but the bulk of my items are jewelry pieces in the $15-$25 range, I also have a fair amount of "filler" pieces for less than $5, because, hey, it's an anime con, I know some people have very limited funds for the AA. Generally, I find mid-range jewelry sells the best, and I am always honestly shocked that the filler stuff that is priced at $3 or $4 hardly sells at all. Maybe people just aren't as cheap as I am sometimes XD?

The first few cons I actually had a the problem of guy shoppers not even glancing at my table, I think it's Loli-ness scared a lot of them off, even though I did have a fair number of more unisex steampunkish and gothic pieces. I wasn't really expecting to do very much business to anyone who wasn't a Lolita or a Brolita, but it was still kind of a bummer to automatically cut out 50% of all shoppers. However, the last con I went to, I really got into making more creepy pieces featuring eyeballs and realistic clay teeth, and I found a lot of guys stopping to look and compliment, and a good amount of them actually buying the more creepy pieces. I guess the pieces' weirdness just sort of grabbed more people's attention? Where a guy would normally think "Oh this, is girls' stuff, keep walking", instead he stopped to think "WTF is that!? Oh it's kind of cool, I should probably give this girl some money for it" XD

The last con I went to I split my table right down the middle and put the more Classic stuff on one side, and the Sweet stuff on the other, I think this helped a lot more than having it a bit mixed together. I know a lot of people say to have a big vertical display, but I just couldn't lug one up to the cons I go to, so I had to skip it. Luckily, I feel like maybe vertical displays maybe have a lot to do with being an artist and a print seller? Because it's not like noticed a lack of sales, but then again, I've also just never had the opportunity to have a vertical display, so I don't really have anything to compare it too!

Here are some photos of my table at the last con I went to. This got pretty disorganized pretty quickly, and while I tried to be on top of straightening my table up, I took a few of these when it was really messy! My table was a bit cluttered, which is probably not a good thing, but I was working with less room than I was expecting. A few people commented on how they liked the setup, cluttered and all, so that was nice! 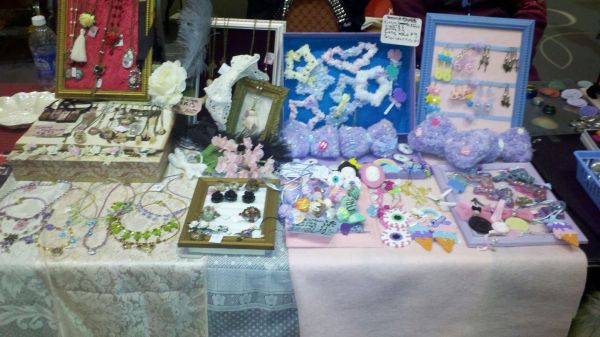 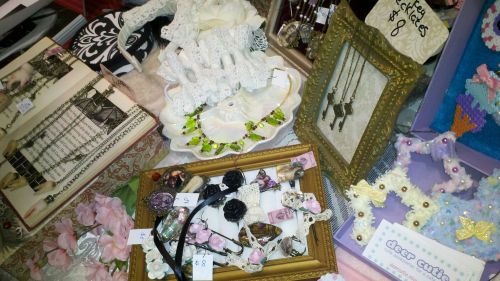 As you can see in the business cards, when I fiiiinally get around to reopening my Etsy, I'm putting all the sweet stuff in a new shop called Deer Cutie! 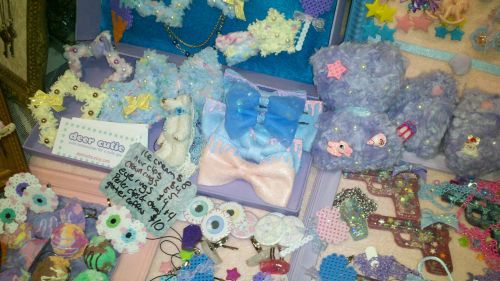 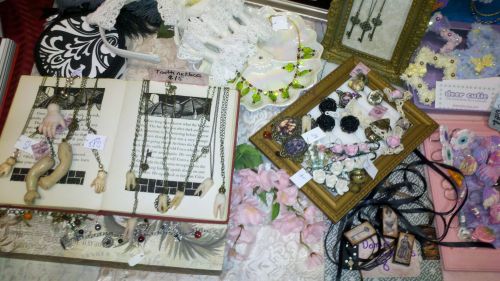 I'm also curious about those who sell at craft fairs, as well as those that sell non-lolita stuff in the artist alley! I'm just really interested in how other Lolitas, who create go about marketing their brand/shop especially when it comes to anime conventions.
Tags: community: market research, crafts: help/questions, discussion: starting a brand
Subscribe