I stumbled across this recipe accidentally and I really couldn't pass it. Not only because it seemed tasty, but also because I love Baby's and AP's cake prints :3

So here it is, Sugar Rose Cake! 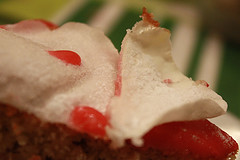 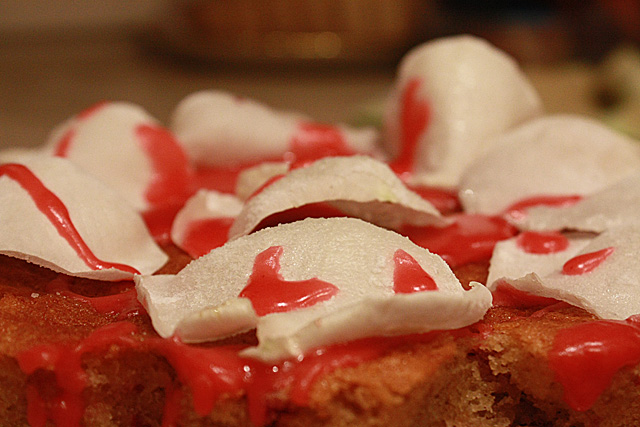 
Instructions:
1. The original recipe instructs to make the sugar petals a day in advance. In the comments to the recipe I read that it actually takes no more than 15 minutes for the petals to sugarize. So I made them while the cake was in the oven and they turned out right :3
Separate the petals and spread the caster sugar over a plate. Holding one petal at a time, lightly paint both sides with egg white. Spoon sugar over it, then using tweezers, shake off the excess. Dry on baking parchment for 15 minutes/a day.
2. Preheat the oven to 180C/gas 4/fan 160C. Butter two 20cm/8in round cake forms and line their bases with baking parchment. Tip the sugar into a mixing bowl and add the softened butter. Beat for a minute or so until pale and fluffy, then beat in the egg yolks.
3. Sift the flour and baking powder over the cake mixture. Fold in as lightly as you can using a large metal spoon, then fold in the almonds and extract. Stop folding as soon as the flour traces have gone. Tip: yes, you should use both the self-raising flour and the baking powder - because of the almond. If you use regular flour like I did, just put in a double dose of baking powder.
4. Whisk the egg whites until they just hold their shape. Gently fold a third of the egg white into the cake mix, using the whisk. Repeat with another third, then the final third. Take care not to over-mix and lose the lightness of the egg whites.
5. Lightly fold in the raspberries. If you, like me, will not be using fresh raspberries, put them in the mixture while they're still frozen, then defrost the rest for the cream. Divide between the prepared cake forms and level the mixture using a round-bladed knife. Bake for 30-35 minutes. Cool in the tin for 5 minutes, then turn out, peel off the lining paper and leave to cool completely.
6. Set one cake on a serving plate or cake stand. The original recipe uses Cornish clotted cream, but it's rather hard to obtain in parts of the world other than Britain. I just beat up thick cream in a mixer. Be careful and not overdo it, otherwise the water in cream will start to separate. The cream might not look thick enough to hold up the second cake, but it will be after the cake spends some time in the fridge. Spoon the cream on to the cake with a dessert spoon. Scatter the raspberries over and put the other cake on top. Blend the icing sugar with 1-11⁄2 tbsp cold water until it is smooth and coats the back of a spoon thinly. Instead of regular water I used some raspberry juice to give the icing colour and fragrance. Drizzle the icing over the cake. Scatter the rose petals over and around the cake, dust with icing sugar and serve. 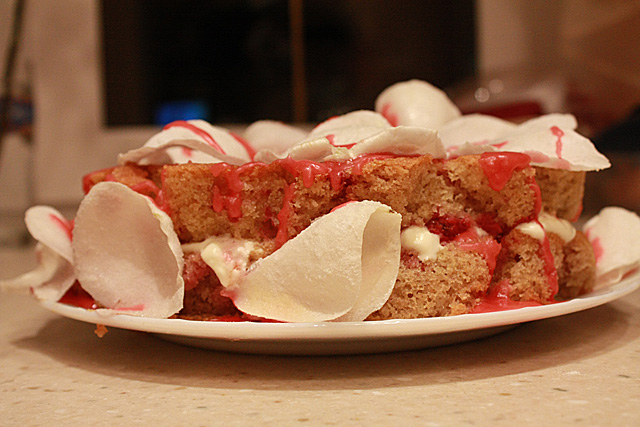 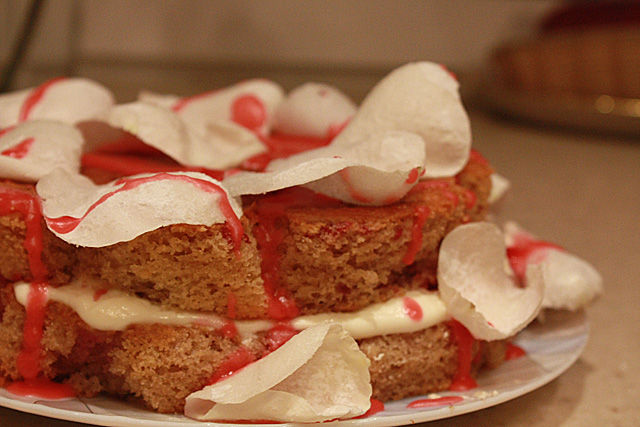 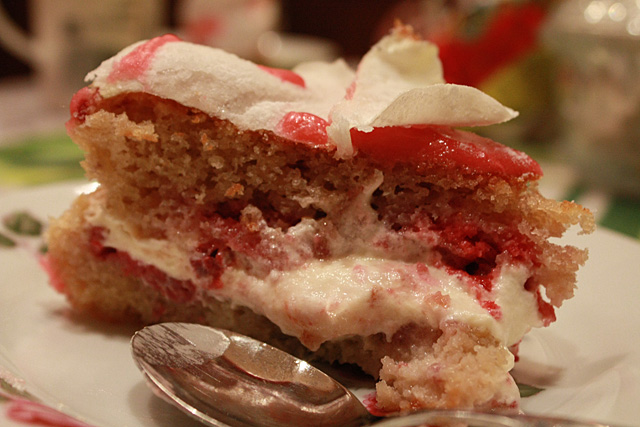