I ordered these in the middle of June and got them about a month later. He was happy to accept extra requests for a white half bonnet and white wrist cuffs. I was quoted that I would get them sooner than I did. He was good about communication except that towards the end after he gave me the delivery confirmation (tracking) number, he did not answer my emails until I opened a dispute, which caught his attention. I did so because the tracking number said consistently for about a week that there was no record found. I only opened the dispute because it was, after all, qutie an investment (over $100) for the items and because well, he wasn't responding to the etsy messages or my emails. It worked, he finally sent the items out, and dispute was closed.
It's understandable that life comes up and delays you from shipping (hell, I've had that happen to me). However, he is extremely personable, and was very concerned that I liked them. I find it a little strange though, because if you were so concerned, the quality of construction would be better, and you wouldn't be so clumsy as to leave loose threads on almost allt he pieces. I wasn't pleased with the black bonnet so he offered to remake it for me at least. So overall it was a good experience, though got a little nervous when he did not answer and for that not really sure if I'm going to buy again.

What was sweet is that he included an apology letter and 2 gifts- a white sidebow (yay! what I needed!) and a black tulle pearl hair clip. I don't take them as bribes because he was sure to tell me to be honest in my (this) review, and that he could not wait for it.

Packaging:
Came in a priority mail envelope in good condition. 3 seperate packets wrapped in gold paper with his signia taped on:
Forgive me that it looks a little wonky here. I had already opened the package :D 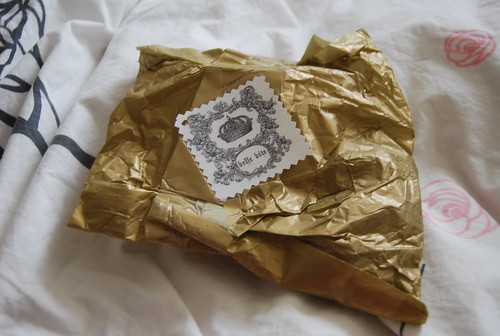 So for this part:
Communication: 6/10 Fine until the very end. It was a big order after all. But the fact that I had to open up a dispute (and I'm not the only one apparently- http://community.livejournal.com/egl_comm_sales/7207180.html?view=113967628#t113967628
) to get his attention puts communication down several notches.
Shipping time: 8/10 Gave me the confirmation number but shipped it nearly a week later.
Packaging: 10/10 No problems here!

Here are the goods: 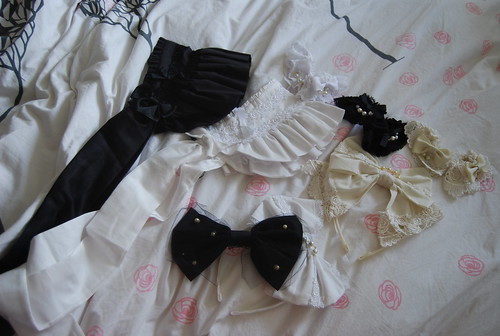 My favorite were the wristcuffs. I'm not the best at making them myself, so these were a treat. They are well sewn and the lace is absolutely adorable. The only complaint I would have about them is that there were still loose threads hanging. No problem. Easily can cut them off. 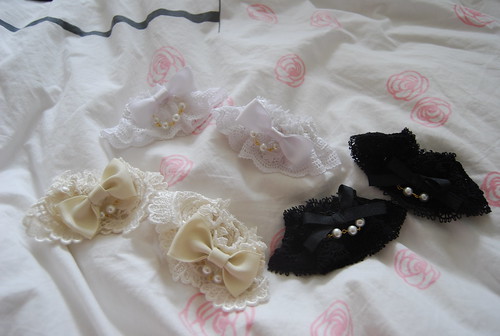 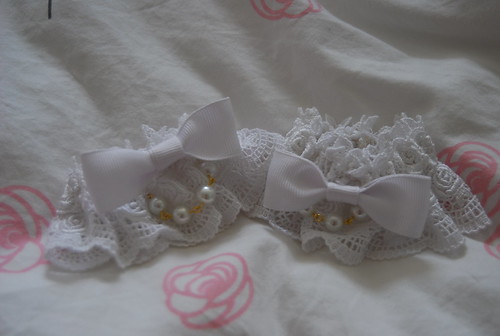 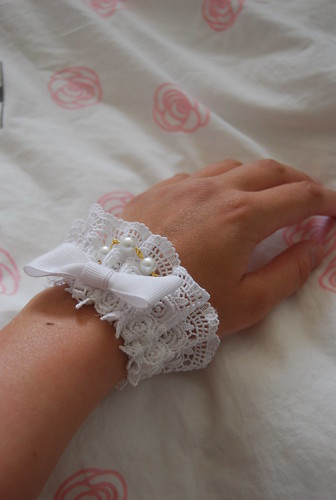 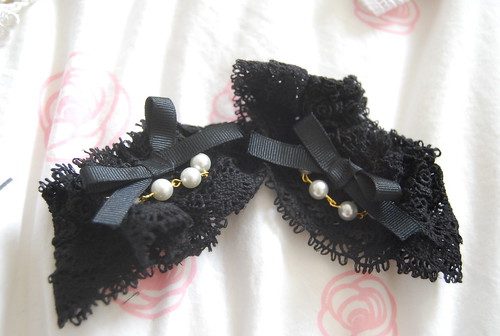 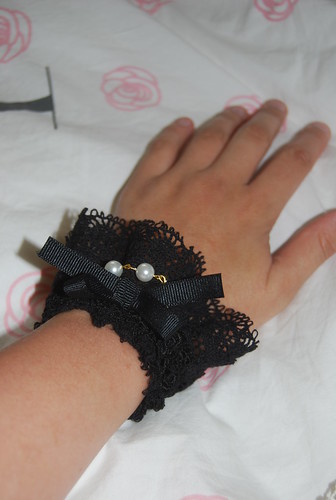 Close up of my favorite, the cream cuffs: 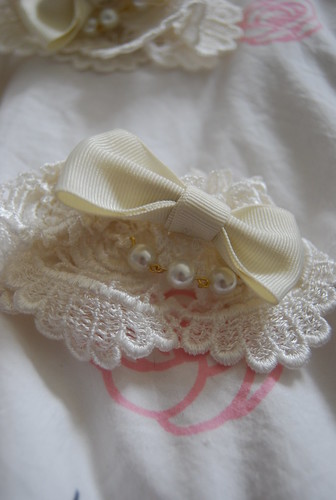 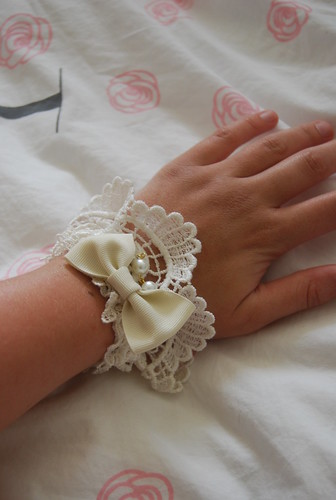 Just for the curious, picture of them inverted: 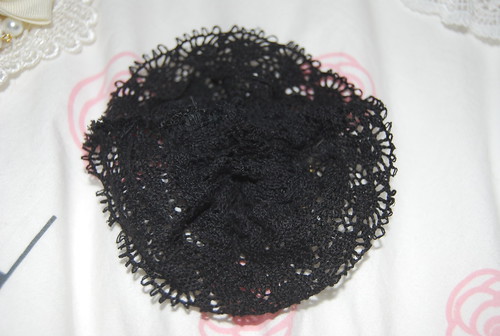 Antique lace one that was available in the shop: 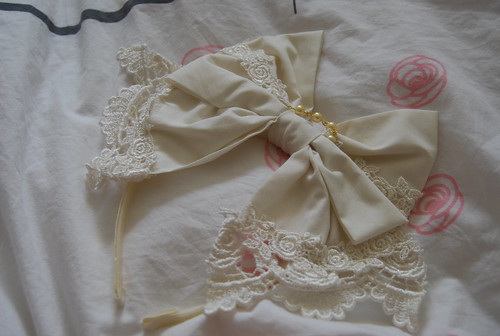 Goregous lace is GOREGOUS. This would be a head-eating bow, granted, but it's nice quality. The headband is not incased in a fabric tube but has ribbon glue to the outer rim, which looks fine as well! 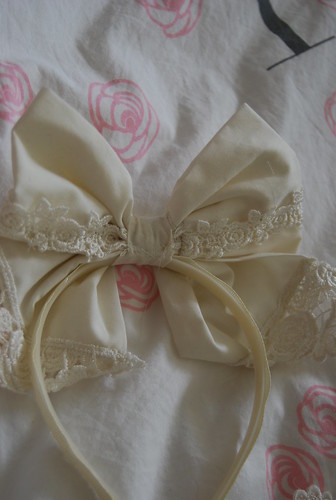 Only complaint here is that the back in the center is slightly messy, and there are loose threads here too. 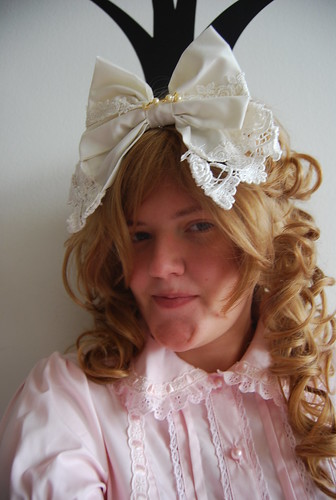 Here are the two headpieces I got as gifts! 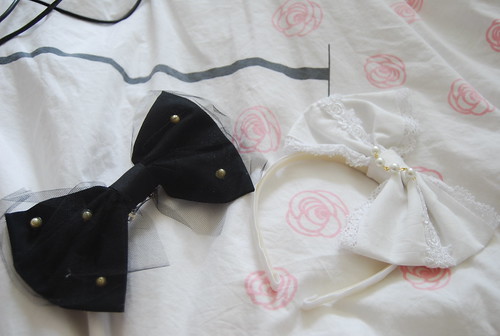 Close up of white sidebow: 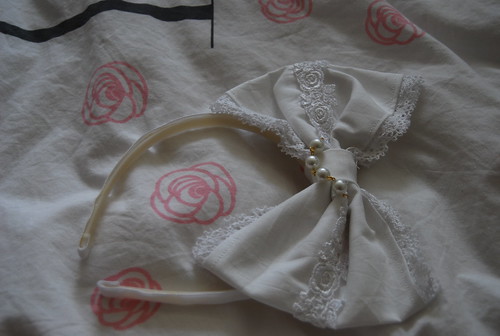 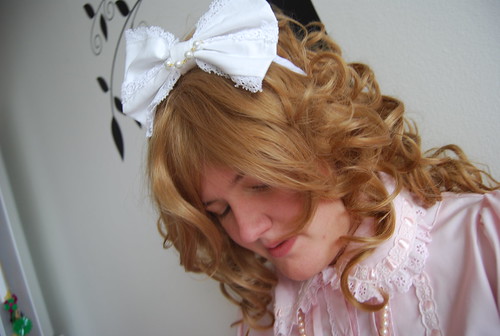 Close up of black clip bow: 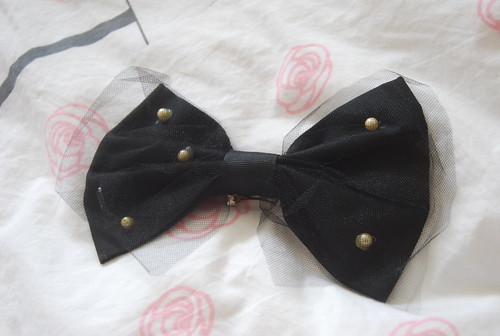 As you can see it's a tulle and pearl bow! It's cute as a gift, but you can see the glue for the pearls so I'm not sure if I would have bought it normally.

This is where I wasn't as happy. 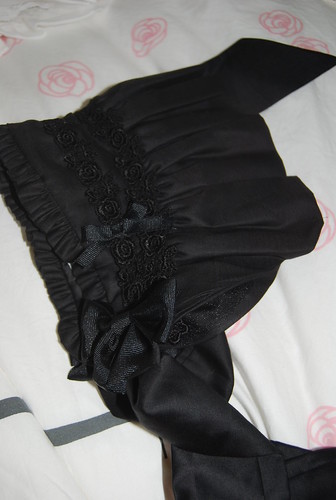 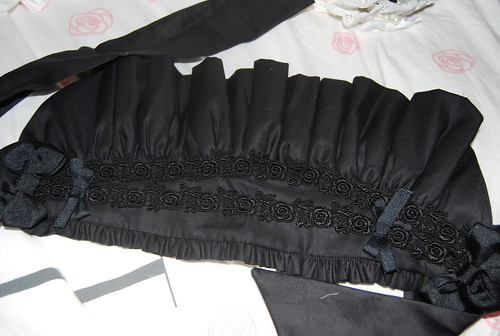 The top of the bonnet lokos fine, and is sew nicely. Loving the lace that was used. 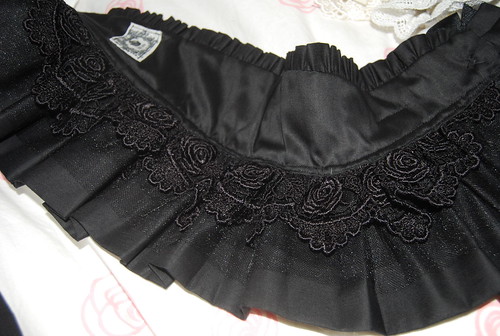 However the inside is a bit less appealing. The lace is nice, but there is tulle between the cotton and the lace. That's totalyl fine, except there are places where the tulle wasn't cut straight. There's a point where there's a loose piece hanging off the edge...cut but not finished!! 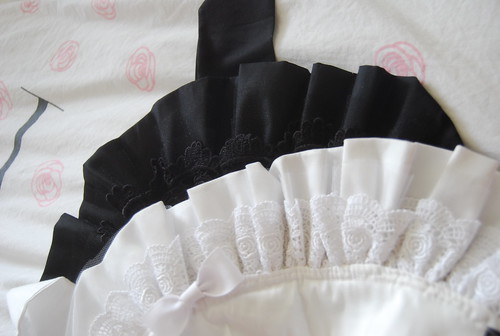 My biggest complaint about the black one? Look at the brim! It's mcuh wider than the white one. The lace is super heavy so the brim just flops down when worn. So it looks absolutely silly

Here's what I mean:

It looks a *little* better with the cyperous wig on (because of the poofed lump). But that should not be the case- I should be able to wear it without looking weird without having to style my hair that way. 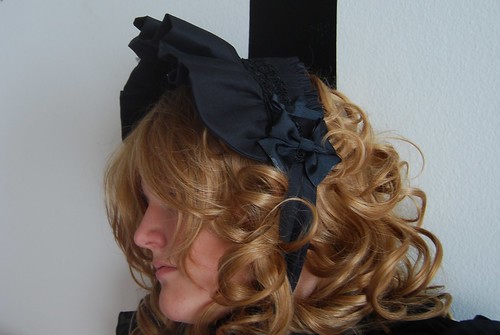 HOWEVER- he is going to replace it for me for free with a smaller brim.

The white one half bonnet:

This one is a little better. It dosen't have such a wide brim so it doesn't look as silly. 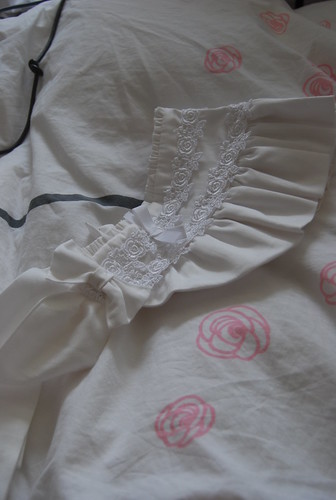 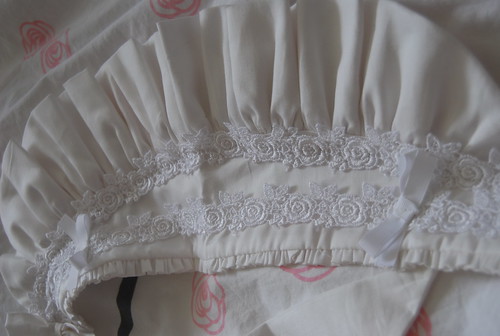 The ouside looks nice. Again, fan of the lace. 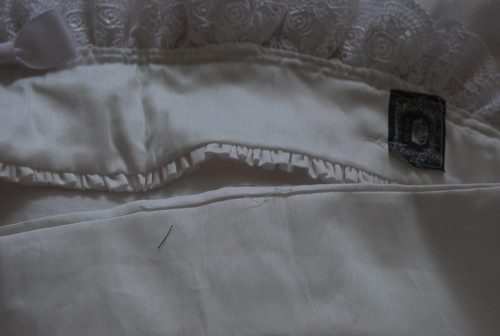 However- the ribbon of the bonnet isn't sewn that well! As you can see, it's not completely even, and there were loose threads. It looks like it was rushed, which is a little hard to understand since he had a whole month to create this one (which was a custom order) 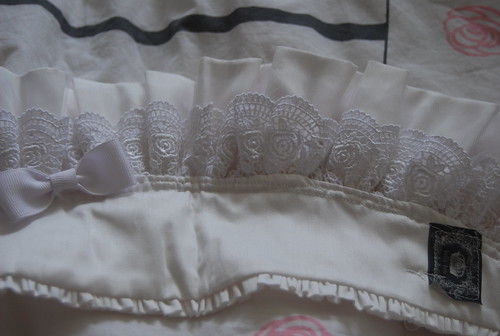 Also the inside is a bit uneven, and the label, while cute, looks like it was hastily sewn on. 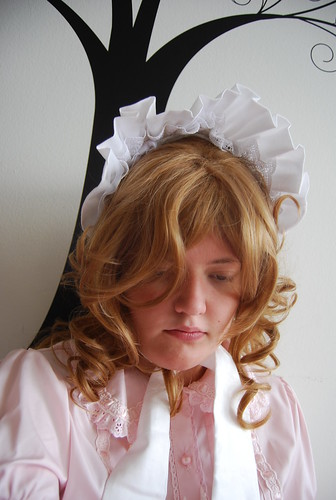 Construction: 8/10 Uneven sewing, uneven lengths for the brims, didn't take into account that long brim and heavy lace would make the brim flop, loose threads, uneven cutting of tulle BUT- for that price, it's pretty good!
Materials: 10/10 Good cotton, good lace.
Pricing: 9/10 (for $35 a pop, it was a pretty good deal.)
Other: Do note that the black half bonnet will be remade. AND according to him, he's making smaller brim bonnets now.


In summary:
Communication: 6/10 Fine until the very end. It was a big order after all. But the fact that I had to open up a dispute (and I'm not the only one apparently- http://community.livejournal.com/egl_comm_sales/7207180.html?view=113967628#t113967628
) to get his attention puts communication down several notches.Shipping time: 8/10 -Gave me the confirmation number but shipped it nearly a week later.
Packaging: 10/10 -No problems here!
Construction: 8.5/10 -The cuffs were fantastic, the headbows were nice except for a small problem with the back construction (not seen when worn), and the bonnets could have been better. BUT the construction of the bonnets was decent, considering the price!
Materials: 10/10 -Beautiful lace, good cotton
Pricing: 9.5/10: Headbows and cuffs were very nicely priced. The bonnets were well priced considering what they were :D

I'll post a 2nd review of the black half bonnet when I receive it.

Overall, I'm happy with some of the things I got. However, I'm skeptical about ordering because of time, and now even more so because of comments made in this post http://community.livejournal.com/egl_comm_sales/7207180.html?view=113967628#t113967628
There's some nice stuff, and he's personable when he's actually communicating, but the service leaves something to be desired.

Moral of the story, sellers (and I can preach because I've been there, in tied up situations where I didn't have time to complete things on time): DON'T take on too much all at once!!!!